Recently Falling Skies came to an end for the summer. Many fans were sad to see Dai, played by Peter Shinkoda, die in the season finale. I recently talked to the actor in an exclusive interview for SciFi Vision specifically about filming the death sequence and the end of his journey on the series.

"You know, there's a lot of development in the writing room as you go; it's a very organic process with the rewrites. So maybe because it was a very important episode - the final hour – the first time we got the first draft was maybe three days or two days before actually shooting the last hour. And at that point there weren't any deaths; there was a lot of action but there weren't any deaths. A lot of people had issues with that, including Noah [Wyle]. And we all were eagerly waiting, a rewrite was supposed to come in maybe a day and a half before we started shooting. We were "Wow, wow, wow, what's going on? We need our rewrite, what's going to happen?"

"So a lot of us were on edge going, "Ooh, ooh, ooh, somebody's got to die!" A lot of us wanted to fix the problems. The one thing that we were all scratching our heads about was, we were going, "Wow, it's a war show, season finale, big action, nobody dies."

"So when the rewrites were about to come in, in the afternoon, Greg Beeman pulled me aside at the end of the day, he's going "How come the rewrites aren't here? How come they aren't in my trailer?"

"By at the end of the day Greg, the gentleman that he is took me aside privately, came into the production office - he wasn't supposed to be on set that day because we were filming the second-to-last episode, which he wasn't directing - he came in, took me aside and broke the news to me. But I knew already. You know, when he asked me what are you doing next, "I'm wrapping, like the two hundred people on set, Greg."

"...And I turned to a couple of my friends... and [told] them "I think I'm going to die," and they looked at me like I was dead serious, and I was dead serious. I saw Greg go over and talk to Noah, and I saw Noah immediately his head drop. And I then knew. 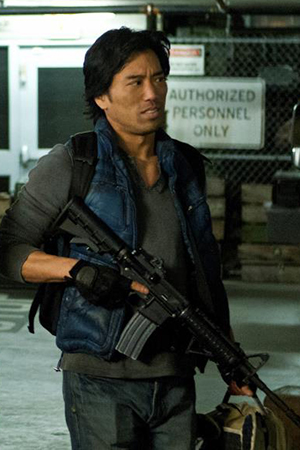 "But a couple of moments later I fell into stride with Greg Beeman and he goes, "So..." and I said "This is where I die."

"I found it really sad because I knew, I knew this could happen. And he goes "Yes, any requests?" "Don't make me die like a bitch." He goes "Done, I will not, I will not," and he was very comforting."

Wyle also talked to Shinkoda about his character, Dai's, death. "Noah pulled me aside in a production meeting in maybe half an hour. People were coming up to him going "Noah, we have got to get this..." and he goes "Tell them I'm busy!" You know, we've been together for two years; he expressed regret and everything."

Shinkoda believes that his character's death works and will have a big impact, because it shows that anybody can die on the series. "I'd like to think that I took it in stride and stoically. But to tell you the truth, if it had gone any other way, I would have been pissed. After sleeping on it 24 hours later, in retrospect looking at everything, at the whole project, I did come to terms with it. And in fact I was very supportive of it. It was very logical to me as an actor, financially speaking, but mostly the story, looking at all the characters, looking at what could really bring attention and shock people, giving them a slap in the face, and pretty much the way it depicts the world that we live in. It's very logical from a storytelling stance, it was perfectly logical. As much as people might squirm and be pissed, there will be blowback on the internet, I support it, as equally bad as people are going to take it [some will take it] as equally as good, because that will draw them into season three, and in season three it'll be a footnote that "Oh yeah, Dai is dead." They'll have like eight to ten months to get over that.

"It was a great opportunity; it was okay. I support it. Dai dying will basically assure the longevity of the show. It was a good move; it's a great writing device and I had no problems with it. I think it was a smart move. It was undeniably the thing to do, actually. And I never worry about my own ass. Right from the initial beginning I go, "For this show to be good, there must be deaths." And when seeing the breakdown for my character, he was out in the line of fire, he was Tom Mason's right hand man, a commando on the field, a man of – this is actually from the breakdown of the character - "a man of very little words, but a man of action."

"So I knew damn well from that, he is most likely to be out there and sustain some kind of injury. How long can he live? How many times can he be out there? I'll be the one to go out there, I'll approach the perimeter, I'll engage the enemy, and I'll have their backs. How many times can he do that without dying? I'm like "Eventually he is going to die; I just don't know when." And it happened and I support it. It's great."

Dai's death scene was very complex. "They brought in a stunt guy and like many incidents over the last two years, I was insisting on doing all of my stunts and they won't let me get thrown. So of course they have a flyer and one of these little ratchet systems so you can fly at the wall. I [did a huge part of the take] myself, but the actual impact was done by the stuntman. Even that I could have done, it was two takes: one when I hit the wall high and one when I hit the wall low, but eventually I get some head trauma and die. The thing was, it was shot in a bunch of different ways, different angles. Multiple times when you see me I'm facing and shooting a weapon towards the camera, or there's a shot where Hal (Drew Roy) runs in and sees me. It was over a day, maybe a day and a half we shot a bunch of those scenes to get that sequence together. For the most part I was up in that – my contribution was I had to hang in that wire pulley system. It holds you up five, ten minutes max because you're supporting yourself – [it was] around my torso, my stomach area, right under my ribcage, so you've got to hold your core weight steady to maintain that kind of [posture], otherwise I'd be crumpled and I would've been hanging like dead meat on that thing. So it's easier, that straight posture.

"That was pretty difficult and a bittersweet experience. Also it's fun because who gets to unload their weapons like I did in that scene? And then get thrown? So I think it was great.

"I have not seen it. I saw snippets of it in ADR, when I was doing post sound, the screaming and stuff, but I have not seen it in its entirety. I know it's a dynamic death, an uncomfortable shoot, but also an exhilarating shoot, and I kept reminding myself that nobody gets to die like this on TV, nobody ever has. [Nobody] rarely goes up man to man against an extraterrestrial.

"I could have been Henry Thomas feeding M&Ms to a little docile scrunched up alien in ET, or I could be held up dangling in the air unloading heavy-duty weapons into the face of an alien and then get thrown in the season finale of a war show produced by Steven Spielberg. It was a huge, huge privilege and probably the biggest highlight of my life, that sequence."

If you haven't already, be sure to read Part One of this interview.
Twitter
BotonSocial por: SocialEmpresa
Category: Interviews