At the end of January, SciFi Vision was lucky enough to be invited to a press day for a Midnight, Texas set visit in Albuquerque, New Mexico. The upcoming NBC series is based around Charlaine Harris' book series.

The first night was dinner with the cast, crew, and other journalists, and the following day was on location at the set.

On Monday night after arriving at Hotel Andaluz in Albuquerque, I headed downstairs to dinner at Mas Tapas y Vino to find fellow journalists as well as some of the members of the cast and crew of the series. 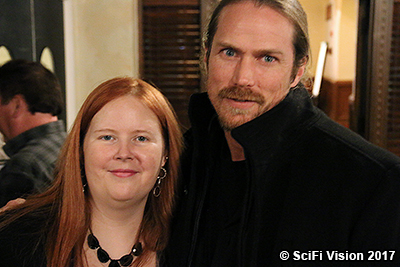 Before our meals were ordered, we went out into the lobby to interview the cast and crew who were there. We were divided into small groups; there were these cool little secluded alcoves that we set up in.

First up for our group was Jason Lewis, who plays Joe Strong in the series. Joe is an angel and helps protect the townspeople of Midnight. The actor talked about why Joe is in the town and a bit about it. “The town itself is a nexus point for reality. It is a spot between Earth and Hell that's very thin. And he has been there at this battle before. He has been watching over this space on the Earth for a long, long time. So he has a lot of history there. He's watched this possible Armageddon trying to manifest itself in this place for quite some time. 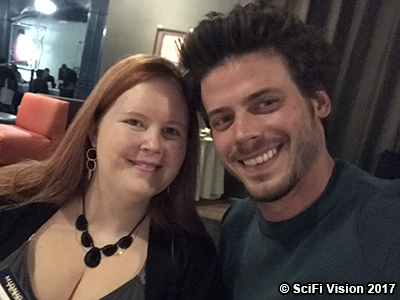 “I think the idea of him being there now, is it's a place where supernaturals have kind of congregated, unbeknownst to themselves why they've been drawn to it. It's a place where they can exist without having to be under society's conventions. I would say that's probably the strongest draw consciously, but there's a lot of unconscious draw that goes more to the supernatural for these characters.”

He also talked about the physicality of his wings. “It's the idea that it's a physical transformation, that the wings actually exist in my body. They took the time to look at it, and instead of them just magically appearing, there would be some sort of physical [part to it]. So I look at it as like a very painful birthing process. It's kind of a contorting thing where you've got to move some muscles out of the way and bones out of the way and spread and open, and then they're supposed be coming out of my back in special pockets of musculature that I have in my anatomy. So it sucks; it's painful. So I just went with pain. [laughs] 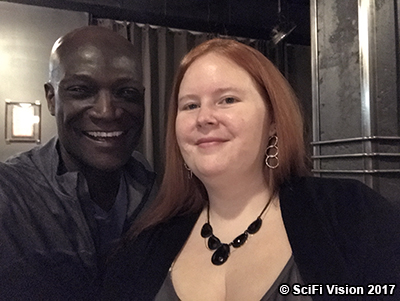 “It's not a comfortable transformation, at least that's how I chose to play it, and nobody told me to stop, so I think it lives. But I just figured, you know, these things are massive. The binding of them inside of my body, I figured it had to be somewhat uncomfortable.”

Next was François Arnaud, who stars as Manfred Bernardo, who arrives in the town of Midnight to escape his past. He has the ability to see and speak to the dead.

He talked about his character, including Manfred’s struggle with his abilities. “I think it's definitely more of a curse than a blessing, and you'll see more of that in the following episodes, but he has tried to use it as a blessing, or has tried to make the most of it. He's definitely gifted. He doesn't really control his power, but he's definitely used it to scam people and has gotten away with it in the past, and is sort of on the run and hiding in Midnight because of it. 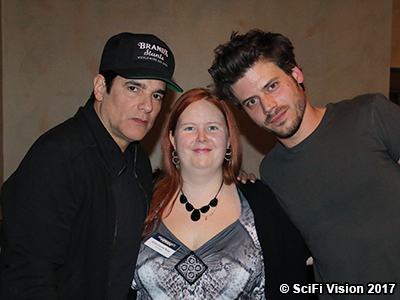 “And so those things will obviously come back and haunt him, [laughs] quite literally.

"But I think it's a coming of age story really, and the journey to understanding his gift and his powers is central to the plot line of the first season.”

François also talked about Manfred being a flawed character who was at first reluctant to help the townspeople. “I think that what's great about the character, is that he's not particularly willing [laughs] to put himself on the line to help others. And that's why it's so interesting to play a character who's flawed and selfish and a reluctant hero, who will eventually learn to be the hero that he was told he's meant to be. 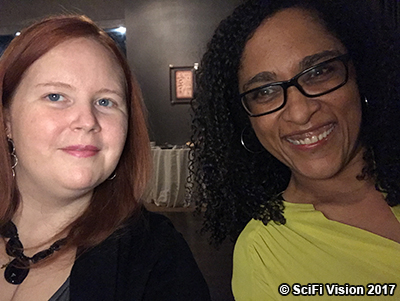 “...He has nowhere else to go, and he might as well make the most of it and make these people his friends rather than enemies. But I think ultimately he does find it rewarding to help others, but it's definitely a learning curve.”

He also revealed a bit about the “rumblings” that are going on under his house, and how the town is a potential Hellmouth.

we were then joined by Peter Mensah, who plays vampire Lemuel “Lem” Bridger on the series. He talked about how Lem is different from most vampires. “Lem is unique in that he doesn't have to kill to feed, and therefore survive. He can actually feed off of energy, so he does what he calls leeching, which is something that he can do to a greater or lesser extent. So he can leech to the point of death or can leech in such a refined way it's a soothing experience. So he's fairly surgical in his use of it. That's unique to me; I haven't come across it before. 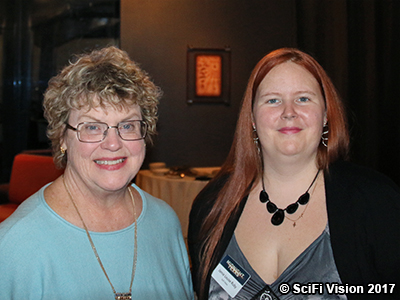 “So we explore that, but he also has the ability to feed like all the vampires we know, and that lends itself to the more terrifying aspects of Lem and these stories, that he doesn't hesitate to kill, but in service to his Midnight community. He would rather look after them than have anything happen to them.”

He does, however, have some similar weaknesses as other vampires. “I'm not sure what all of them are, but definitely there is the attraction to blood, and under certain circumstances it's hard to resist, and an aversion to sunlight. So it's meant that I've had to mostly live nights most of the season. [laughs]” 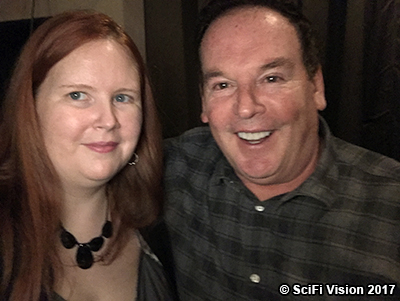 Lastly, our group talked to Yul Vazquez, who plays Reverend Emilo “Rev” Sheehan, who harbors a dark secret. He talked a bit about his character and his place in the town. “Lem and the Reverend in many ways are the moral compasses of the town. The Rev dispenses wisdom sometimes, and sometimes he has to dispense an ass kicking. I mean, both things are true with the Rev. There's a duality in the Rev that he struggles with. Unfortunately I am not allowed to tell you what happens, what the Rev does, but it will be interesting and it will be big.”

He also teased about why he’s there. “There's a reason why he's in Midnight, why he found Midnight, why he’s happy there, and why he wants to preserve the integrity and the sanctity of the town.” 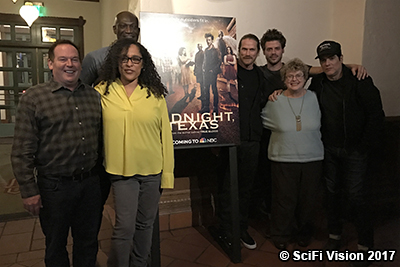 Next we went back into the restaurant to have dinner. I talked to various people before and during dinner, mostly François, who I was sitting next to, Yul, and Monica Breen, one of the showrunners who we interviewed the next day. François also showed me and a few other some videos from set on his phone.

While there I made sure to get a photo with everyone. I also met Charlaine Harris and executive producer/showrunner Janollari briefly, both of whom I also talked to more the next day. 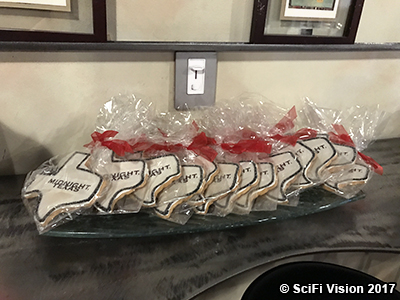 After dinner we all stepped out into the hall to get some shots of the cast and crew in front of a poster for the show.

Upon leaving, I picked up one of the Texas shaped cookies that were made special for us.

We then said our good byes and went back to our rooms.

**Be sure to check out day two and more from the event and stay tuned for much more, including full individual interviews and more set photos.**
Twitter
BotonSocial por: SocialEmpresa
Category: Special Events