Disney+ adds a new streaming series, Just Beyond, for October’s spooky, fun-filled programming. The series is based upon the mind of R.L. Stine and the like-named graphic novels. A mysterious, creepy, kitschy, horror anthology of shows best viewed by tweens, teens, and their parents. Each episode has a Twilight Zone feel to it.

On the eve of the streaming debut of Just Beyond, creator Seth Grahame-Smith introduced his series for its world premiere at Disney+’s Hallowstream at the special drive-in screening event in Culver City last Tuesday. The crisp, cool fall air along with Disney’s detailed, decorated drive through entry experience helped to frame the night for Just Beyond’s spooky, horror series' debut. The debut premiered three episodes with many of Just Beyond’s cast and crew in attendance. 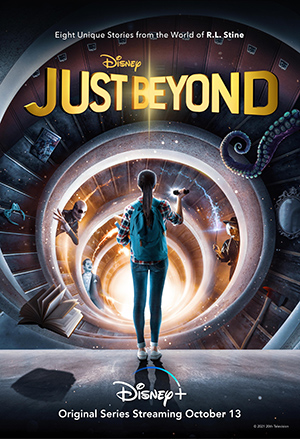 After each episode, people cheered and clapped from their cars as well as celebrating by honking and beeping their car horns. The night made for perfect, captivating fun from the creepy headmistress, witches, and visions that walk beside us.

Just Beyond has eight-episodes and is currently streaming on Disney+.