Published: Friday, 18 June 2021 23:46 | Written by Jamie Ruby
One of the shows highlighted for day eight of the ATX TV Festival was The Good Fight. Paramount+ provided an early screening of the season five premiere of the series, which returns June 24th. Following the episode there was a panel Q&A with the creatives and cast.

The Kings started off by talking about Memo 618, which was named after their daughter’s birthday. They also explained about how they decided to do a stand alone story in the first episode, because they wanted to tell what the characters lived through in the last year and what it was like for them. They also used the episode to wrap up the stories for the characters of Adrian and Lucca and give them proper goodbyes, because they didn’t get to do that last season, because they were shut down because of COVID. 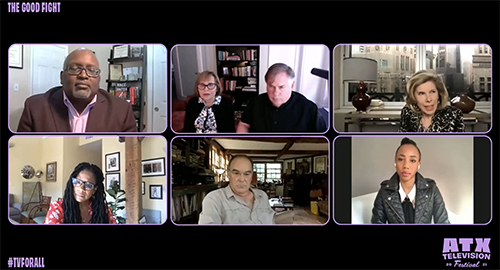 Baranski explained how she has been able to keep her character fresh by living through important political moments and was able to use her exasperation at the previous president for her character, as well as how they had to change the narrative when Hillary Clinton didn’t win. The others also addressed dealing with the political events as well as other complicated subjects. They also talked about having a white woman in an African American law firm.

Patinkin, who didn’t want to reveal spoil things about his character, Judge Hal Wackner, talked about the Kings bringing in out of work Broadway actors and crew.

Bingwa expanded on her character, Carmen, who came from a tough part of town and grew up around people who were oppressed by the system. She uses her street smarts in the series to make the system work for her and is an unconventional underdog.

The Kings talked about how what happened with George Floyd affected the series, and how they probably wouldn’t have had the same story with the struggle between Liz and Diane at the firm if it hadn’t happened. They think impact it has had on the industry may not really be seen for two years.

The panel also talked about the changes in production due to COVID restrictions.
Twitter
BotonSocial por: SocialEmpresa
Category: Event News