Double-crossed while sent to collect stolen intelligence in East Germany, elusive secret agent Charlize Theron (Mad Max: Fury Road, The Fate of the Furious) unleashes a deadly arsenal of skills in ATOMIC BLONDE, the adrenaline pumping, stylish spy-thriller, coming to Digital on October 24, 2017 and 4K Ultra HD, Blu-ray™, DVD and On Demand on November 14, 2017, from Universal Pictures Home Entertainment. Adapted from Antony Johnson’s graphic novel, The Coldest City, the explosive film set in the late eighties takes viewers on a high-stakes chase as Theron attempts to escape Berlin. The 4K Ultra HD, Blu-ray™, DVD and Digital versions include commentary from the cast, filmmakers, stunt performers and fight coordinators, plus behind-the-scenes features that take viewers inside the making of the film’s intense stunt choreography. Read the full press release.

In preparation for the the release, SciFi Vision is giving away 1 copy of Atomic Blonde on Blu-ray! 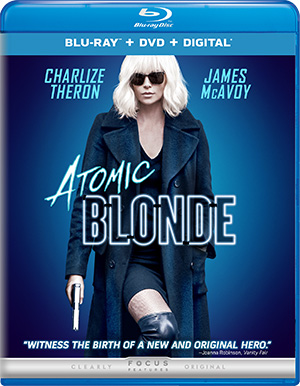