For the first time, starting tonight, Syfy will be airing a month of Syfy Saturday original monster movies - four weeks in a row, kicking off with Jersey Shore Shark Attack.

It's Fourth of July weekend on the Jersey Shore when the parties are interrupted by a bunch of albino sharks, brought close to land by underwater drilling and it's up to the Guidos to save the day! 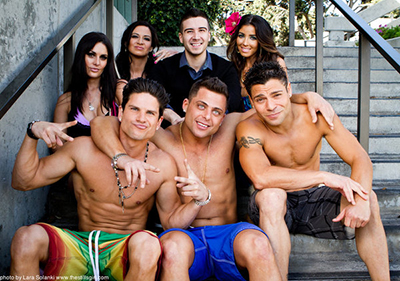 Greedy developer Dolan (William Atherton) wants to tear down the boardwalk to replace it with a resort, and get rid of the Guidos at the same time, and doesn't care what it takes. The locals at the Jersey Shore - "The Complication" (Jeremy Luke), Donny (Joey Russo), and Balzac (Daniel Booko) know something is up, but even TC's dad (Jack Scalia), the police chief, doesn't believe them. The group makes it their mission to save the town, and of course, the girl (Nookie, played by Melissa Molinaro).

Obviously the film is not meant to be taken seriously and is somewhat a parody of the Jersey Shore. Not having watched the original before, I was not sure I would get the references, but if you have a passing knowledge of those on the show, you will get most of the jokes. As another injoke, Vinny Guadagnino from the Jersey Shore plays on-scene reporter Conte. 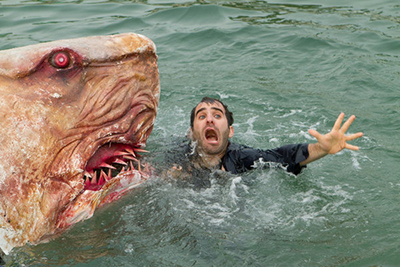 When it comes to Syfy movies, I tend to more enjoy the more serious ones, not as much the campy. However, this film was pleasantly surprising. Yes it was silly, very much so, and it was meant to be, but in this case, it worked. I found myself laughing a lot during the movie, even though I do not watch Jersey Shore (nor do I care to). The personalities in the movie though were great, and the characters had some great lines, though of course everything was over the top, but again, it worked. Without giving anything way, I think I laughed the most when the group was on the rocks trying to stop the sharks and talking about burying their friend. It was so ridiculous (but in a good way) I couldn't help but laugh. The other great scene (possibly the best of the film) is with Joey Fatone ('N Sync).

If you like campy Syfy movies, you should watch. Even if you don't, you still might get a kick out of this.