Advance Review: Lucifer Returns with an Epic End to Season 5

Published: Friday, 28 May 2021 03:00 | Written by Jamie Ruby
***The following review has slight spoilers for season 5B, though not really much more than the trailer***

Fans have been waiting with bated breath for today to arrive and Netflix to drop season 5B of the hit series Lucifer.

At the end of last season, Lucifer (Tom Ellis) was about to finally say those three little words to his girlfriend, Detective Chloe Decker (Lauren Graham), when Amenadiel (D.B. Woodside), accidentally stopped time after Lucifer's twin, Michael (also Ellis), got into his head and he lost control of his powers, crushingly to fans, halting Lucifer’s confession.

Leaving Chloe in the storage closet, Lucifer helped Amenadiel battle Michael, as well as Maze (Lesley-Ann Brandt), who had once again sold out Lucifer to get what she wanted. In this case, Michael had agreed to give her an audience with his father, who she believed could give her a soul.

At the height of the battle, their father, God, showed up in the form of Dennis Haysbert to break up the fight.

The back half of the season, which focuses on God’s arrival and how it impacts his sons, picks up right at that moment, and what follows is an intense episode called “Family Dinner” that forces Lucifer to deal with a lot of his “Daddy issues.” It gets the show off to a fantastic start. Haysbert has great chemistry with Ellis and Woodside and it was really interesting to finally see that family dynamic. Ellis is so flawless I constantly forget that it’s him playing both twins. He makes it easy to differentiate between the two. 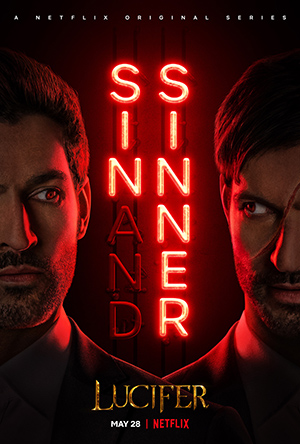 There’s a lot going on beneath the surface in this episode. I appreciated how the first case parallels Lucifer’s feelings for his family, even if he’s not always correct in his assessments.  He finally gets a lot off his chest for once (I especially liked him calling out his father on Hell no longer needing a warden!). It was also interesting to see Michael’s point of view a bit. Lucifer may have been hurt, but he’s not the only one, even if they both dealt with their feelings in vastly different ways. Amenadiel’s conversation about Charlie and his mortality was also touching.

Another high point of the episode was Linda (Rachael Harris)’s interactions with God, being a spectator to their squabbles and quite insightful, yet also being so out of her element. She really brought the comic relief to what otherwise could have been a very heavy episode.

The second episode, entitled “Bloody Celestial Karaoke Jam,” is the musical episode fans have been waiting for, and it lives up to the hype. Thankfully the singing (and sometimes dancing) is incorporated in a way that fits in with the story for the most part and stops it from feeling awkward. My favorite was definitely Ellis singing “Wicked Game,” and Lucifer’s version of the song fits his raw emotions perfectly. It definitely made me shed a tear, as did his performance with Haysbert of “I Dreamed a Dream.” The mashup of Maze singing “Bad to the Bone” and Ella (Aimee Garcia) singing “No Scrubs” was also memorable, and the huge choreographed number of “Another One Bites the Dust” was also entertaining.

In 511, “Resting Devil Face,” I really enjoyed getting to see Dan (Kevin Alejandro) interact with God and their awkward conversation about Lucifer’s mother (Tricia Helfer). Dan being uncomfortable was cute. There’s also a shocking moment in this episode that literally made me jump. It was so crazy. You’ll know the moment you see it. Haybert was also really funny in the episode.

The next episode, “Daniel Espinoza: Naked and Afraid,” centers on Dan. With so few episodes, I’m not sure we needed one that solely focuses on one character, but nonetheless, it was enjoyable, and I laughed really hard. I liked the episode twist a lot, and finding the hidden Easter Eggs peppered throughout was a blast. 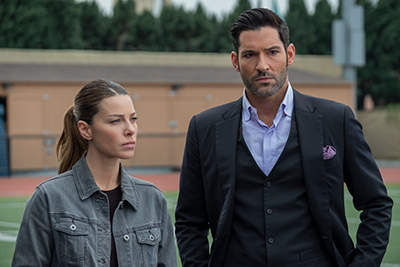 The last four episodes focus on what happens when God decides to take a break, and his sons have to decide who will step up to the plate, which unsurprisingly is not a unanimous decision.

“A Little Harmless Stalking” spotlights Linda. It was nice to finally get some more of her story. The highlights of the episode, however, for me, were the scenes between Lucifer and Chloe - they are so cute together in their awkwardness - and Maze and Eve (Inbar Lavi). I was looking forward to seeing Lavi again, and it was fun watching the two of them together. I don’t want to say too much to spoil things, but it’s also nice to see the growth in Maze, which continues later in the season.

“Nothing Lasts Forever” focuses on a murder at an aquarium. Besides some more cute scenes between our favorite duo, there are some excellent Ella moments where she has a meaningful conversation with Lucifer’s father. There is also a game-changing moment that happens in the episode I don’t want to spoil, but I will say I was quite surprised.

The penultimate episode, “Is This Really How it’s Going to End” starts to wrap up the story as Lucifer and his brother vie to be leader of the universe. I really adored Lucifer’s heartfelt speech to his brother Zadkiel about why he’s doing what he’s doing. I’m not sure Lucifer planned to reveal quite so much, and it was eye-opening for him. 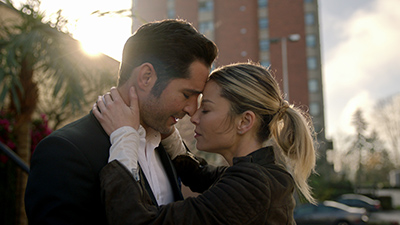 However, the biggest part of the episode is the game-changing ending, and there is a soulful scene between Lucifer and Trixie (Scarlett Estevez) that is so emotional. Estevez has really grown as an actress since the beginning of the series.

So much happens, even in just the last episode alone, “A Chance at a Happy Ending,” and I had so many emotions, but I can’t really say much without spoiling anything, which I don’t want to do. I will just say that the series this season has made a lot of really bold choices, which I appreciate. They didn’t hold back. It’s obvious next season is going to be going in a new and different direction.

Season 5B of Lucifer was memorable and exciting. It had ups and downs and outrageous moments, but more than anything, it was a lot of fun, and I can’t wait to see what is in store for the sixth and final season.
Twitter
BotonSocial por: SocialEmpresa
Category: TV Reviews & Recaps