SciFi Vision | All Reviews | Television Reviews | Advance Preview: Doctor Who - Fugitive of the Judoon will Blow your Timey Wimey Mind

Advance Preview: Doctor Who - Fugitive of the Judoon will Blow your Timey Wimey Mind

Published: Sunday, 26 January 2020 16:28 | Written by Jamie Ruby
**This is a spoiler-free preview review. My detailed recap will be available he soon.**

In tonight’s all-new episode of Doctor Who on BBC America, written by Vinay Patel and Chris Chibnall and directed by Nida Manzoor, the trigger-happy space police, the Judoon, come to Gloucester. The Doctor (Jodie Whittaker) and her team must not only figure out who they are looking for, but stop them from destroying the city.

To say tonight’s episode is mind-blowing is an understatement. During the premiere episode, everyone was shocked with the return of the Master, but that is nothing compared to “Fugitive of the Judoon.” I don’t want to say anything to ruin the surprises and shocks, but they are one after the other. Chibnall is really doing his best to shake things up and change the mythology of the series. 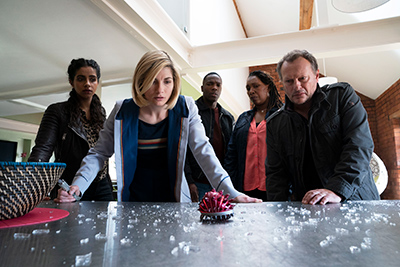 It’s hard to say much without revealing anything, but the storyline this week was spectacular in my opinion. I am still trying to wrap my head around what actually happened. There are so many moments that people will love, especially fans of the show.

This episode has got me so excited, I hate to have to nitpick anything, but there were a couple tiny things that had me scratching my head. The first is that it’s strange that the Doctor leaves her companions alone the way she does without a thought. The second is that there are a few things that one character does, that once you know what’s going on, in retrospect, doesn’t make 100% sense. It wasn’t enough to detract from the episode though. 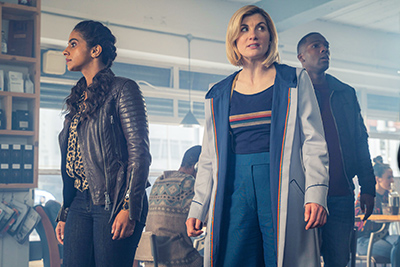 The Doctor’s companions do have some very important pieces in the episode, even if they are a bit sidelined, but to be honest there is so much going on, there really wasn’t time anyway. They probably could have split the episode into two, but the momentum was really strong, and it wasn’t needed. I did absolutely love, however, the team’s interactions with a particular character, who I won’t mention by name. The last scene when the Doctor reunites with her friends was also satisfying.

Jo Martin as Ruth was excellent in the episode, and she and Whittaker are brilliant together. Ruth is sassy, and it’s just a lot of fun to watch the two of them talk it out.

It was also great, of course, to see the Judoon again. They are an interesting alien species; even their language is amusing. I also liked the Doctor’s rhymes about the platoon of Judoon near the lagoon and such. 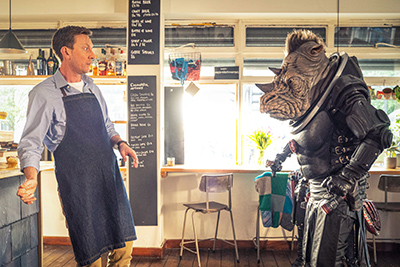 All in all, as a fan of the show, I am super happy with the episode, despite its flaws. I was also pleased that the Doctor’s feelings about what happened in the beginning of the season were somewhat addressed, as it creates more continuity and is a really important storyline. Also, although this episode is heavy on mythology, I do think that even if viewers aren’t familiar with the past seasons of the show, they will be able to enjoy it.
Twitter
BotonSocial por: SocialEmpresa
Category: TV Reviews & Recaps