Published: Sunday, 12 January 2020 16:41 | Written by Jamie Ruby
**This is a spoiler-free preview review. My detailed recap will be available he soon.**

Tonight, on BBC America, on an all-new Doctor Who, the Doctor (Jodie Whittaker) and her friends take a vacation at a luxury resort. The Tranquility Spa seems to have it all, but it’s full of dangerous secrets, and all is not tranquil when ferocious monsters attack. The episode was written by Ed Hime, directed by Lee Haven Jones, and guest stars Laura Fraser and James Buckley.

I do love the mythology on Doctor Who, and although unsurprisingly none of last week’s plot points were addressed, it was nice to get back to a monster-of-the-week episode with “Orphan 55.” To me, the episodic shows have more replay value. 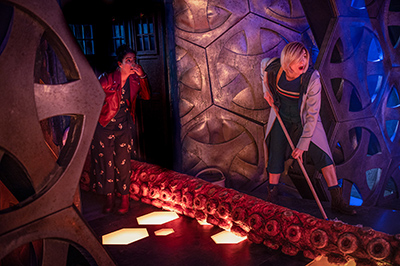 It was a fantastic episode with all the action, adventure, and fun that the show is known for. It was nice to see the gang back together in the episode and the Doctor doing what she does best.

All three of the companions got their turn in the episode this week, although Ryan (Tosin Cole) was a bit highlighted. I was pleased with his storyline and his nervous interactions with the character of Bella (Gia Ré), as well as Yaz (Mandip Gill)’s response to it. Also, seeing Graham (Bradley Walsh) excitingly talking about himself in the third person was amusing. 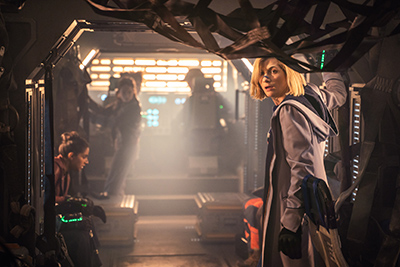 I liked the look of the spa, and the alien design this week was really cool and not silly like they sometimes are. Something about it reminded me of a weevil from Torchwood. The only thing that I wasn’t a fan of was Nevi (Buckley) and Sylas (Lewis Lloyd)’s green hair; it seemed out of place for some reason to me, perhaps because they looked human.

There were some great lines this week, and I especially enjoyed the Doctor dealing with the Hopper virus.

The script itself was well written and unique. I loved the spin on the story, but towards the end it got a bit “preachy.”

All in all though, “Orphan 55” was quite entertaining from every angle, and if the stories continue this way, it will be an excellent season.
Twitter
BotonSocial por: SocialEmpresa
Category: TV Reviews & Recaps