SciFi Vision | All Reviews | Television Reviews | Advance Preview: Doctor Who - Skyfall Part One: An Epic Premiere That Will Leave You Gasping

Advance Preview: Doctor Who - Skyfall Part One: An Epic Premiere That Will Leave You Gasping

Published: Wednesday, 01 January 2020 17:22 | Written by Jamie Ruby
**This is a spoiler-free preview review. My full reaction and a detailed recap is now available here.**

Tonight BBC America premieres season twelve of the hugely popular series Doctor Who, with part one of two entitled “Spyfall - Part One,” with the conclusion premiering on Sunday on both the network and in theaters. In the episode, intelligence agents from around the globe are being attacked by an alien race. MI6 is at a loss and turns to the only one who might be able to help, The Doctor (Jody Whittaker). Can Team TARDIS figure out the conspiracy and save the planet?

The episode, which was written by Chris Chibnall and Directed by Jamie Magnus Stone, guest stars Stephen Fry as head of MI6, Agent C, who recruits the team into the world of espionage, and Sir Lenny Henry CBE as Daniel Barton, head of tech company Vor. Also introduced is Sachs Dhawan as Agent O. 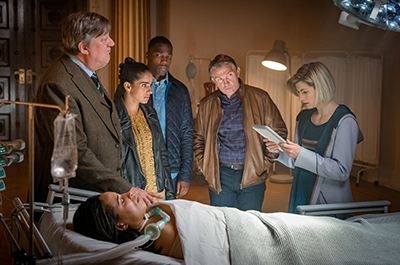 Tonight’s episode was brilliant in many ways, and the overall feeling it gave is no exception. I think the 007/spy theme of the episode fit so perfectly with the series. It was a way to do something different and fun, but it didn’t make the episode silly, as this is quite appropriately a more serious episode.

I liked the look of the aliens, from them taking on the texture of other things to the version we see through most of the episode. It was unique, and it’s always great to meet a new race on the show. Their lack of real appearance helps to make them more mysterious and threatening.

The guest cast was marvelous, and Fry fit the role perfectly; I would have liked to have seen more from him, as it seems like a fun character. Henry was wonderful as well, and I’m excited to see more from Dhawan. 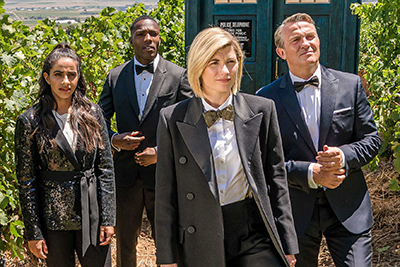 I loved seeing Yaz (Mandip Gill) and Ryan (Tosin Cole) work together to gather intel at Vor, and although Graham (Bradley Walsh) isn’t quite as much at the forefront in the episode, he still definitely brought his “A” game.

The locations the team goes to in the episode (and the ways they get there) are really cool and added an air of grandness to the premiere. This is an episode which will look fantastic on the big screen.

Entering her second season, Whittaker comes in sonic blazing, and she even more so than last year seems at home in the role. She’s embodies The Doctor completely, and I didn’t find myself even thinking about previous incarnations or choices other actors would have made, which I admit I did off and on last season at the beginning. She is The Doctor, and it doesn’t feel like she’s still finding her footing anymore; she’s already there. 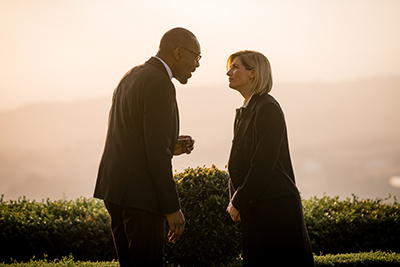 As for the plot, I don’t want to spoil anything, so I can’t really say much, but the story was amazing, and it ends with quite a surprise, which I definitely did not see coming. It was refreshing to not have something spoiled in the trailers (ie Daleks from last year's New Year’s Special) or by word of mouth. It is truly an epic episode that will have you gasping, and it's the best so far of Whittaker’s Doctor. I’m so excited to see where the show goes next and how the cliffhanger will be resolved. Best of all, this time, the next episode is only four days away.
Twitter
BotonSocial por: SocialEmpresa
Category: TV Reviews & Recaps