SciFi Vision | All Reviews | Film Reviews | "Skyline" Will Pull You In

"Skyline" Will Pull You In

If you have seen the trailer for the science fiction thriller Skyline, which opens in theaters today, you may think you have the movie figured out, but you would be wrong. The previews have had people comparing Skyline to movies such as Independence Day or War of the Worlds, but they were intentionally misleading. The creators of the film, Colin and Greg Strause, who also directed the film, did not want people feeling like they knew the movie from the trailers; they wanted them to be surprised. Yes, the movie has fantastic special effects, and yes, it is about aliens taking over, but that's not what lies at the heart of the film. You won't see governments making plans to annihilate the aliens. You'll instead see a group of people fighting for survival in the best ways they know how. Some will try to run; others will stay behind. What would you do?

The story follows Jarrod, played by Eric Balfour (The Texas Chainsaw Massacre, 24, Haven), and his girlfriend as they travel to meet Jarrod's friend Terry (Donald Faison; Clueless, Scrubs), who now is living it up in a penthouse in Los Angeles. The group wake up after partying to what at first is assumed to be an earthquake, but they soon discover it to be much more. Blue light streams in through the windows and one of Terry's friends (Neil Hopkins; Lost, Castle) goes to check it out and suddenly disapears. Jarrod's journey starts, when while trying to help, he is pulled into the light himself, only escaping presumed death by the help of his friends as they struggle and eventually pull him back. They watch in terror as the spaceships' lights take a hold of the people of LA, and the aliens eventually venture into the buildings to capture the rest.

The group struggles to make the right choices to survive the invasion. The twists in the movie will surprise you, and as Eric Balfour, the star of the movie said in a recent, exclusive interview with Sci Fi Vision, "It's not your Disney alien movie. There's no happy ending." 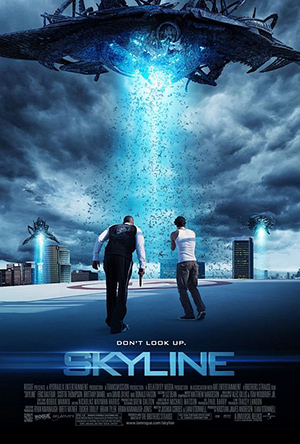 Surprisingly Skyline is an independent feature, created by the Strause brothers on their own dime. Even so, they know what they are doing, having worked on movies such as 2012 and Avatar, which is what enabled them to keep a smaller budget and still use 800 special effects shots in the movie. People will be surprised to know that no green screen was used in the film. They previsualized the shots before filming to enable them to add the effects after without using it. It's amazing to realize this when you see the phenomenal Hollywood scale effects that any big budget movie would be proud of.

The movie was well cast. Eric Balfour finally gets his moment to shine in the film and stands out as everyman Jarrod, who must decide if he has what it takes to protect himself and his family. The movie also stars Scottie Thompson (NCIS, Star Trek) as Balfour's girlfriend, who struggles to accept what's happening around them. David Zayas (Oz, Dexter) plays the take charge building supervisor Oliver, who thinks he knows what is best. The group is rounded out with Terry, his naive girlfriend, and his lover. Some of the characters of the supporting cast; however, fall a bit flat and don't really get a chance to be fleshed out.

The directing of the film was executed well, especially knowing that the whole movie was shot in and around one guy's apartment.

Some of the story may not be original, as it blends some of its plot from other alien movies, and it has somewhat of a slow start, but it picks up speed quickly. The movie is compelling and still maintains enough originality to make it great and in my opinion was well worth the ticket price. All in all Skyline is unexpected in a time when most movies are remakes or sequels. If you are looking for something different or even just a great science fiction or action movie, be sure to check out Skyline.