The Twilight Saga: New Moon, the biggest movie turnout to date, sold out worldwide Thursday night.  Fans around the world gathered together to see their favorite characters come to life.  New Moon is the second installment in the Twilight series based on the book by Stephenie Meyer of the same name.  Twi-hards, as they call themselves, are a huge fan base, including not just teens but also adults as well.  They flock to everything Twilight, snatching up a wide variety of merchandise that is available this year, from shirts to packing tape to even underwear.  Twilight and vampires are everywhere you look these days, and the fans go wild over them.  Fans attending the premiere earlier in the week with a chance to see the stars started camping out five days in advance. 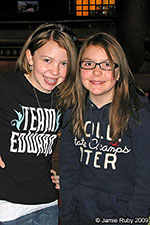 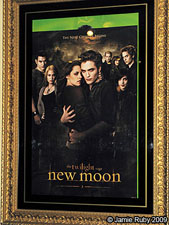 Many movie theaters were sold out weeks in advance of the midnight screening on Thursday as well as Friday night screenings so some fans had to wait until later in the weekend to see the movie.  The midnight showings alone have already reportedly raked in $26.27 million, and have beaten the record for the most advanced ticket sales ever.  The film has made an estimated $140.7 million so far this weekend.

Click on the photos to open full size images. The article includes another image.