We have 1481 guests and one member online

NEW YORK – February 10, 2011 – Syfy unveils the future of food with a daring new hi-tech cooking series for the modern age, Marcel's Quantum Kitchen, featuring Marcel Vigneron, one of America's most notorious chefs on the cutting edge of the culinary field, on Tuesday, March 22 at 10 p.m. ET/PT. Chef Marcel pushes the limits of imagination with his bold style of cooking referred to as molecular gastronomy, which incorporates science into cuisine preparation.

Fresh off of Top Chef All Stars, 30-year-old Marcel has already made a name for himself with his polarizing turn on the Bravo series and as the former head chef at one of Los Angeles' hottest bar/restaurants, Bar 210. Marcel is constantly reinventing himself with cuisine, never preparing food the same way twice through the use of modern tools, techniques and his own creative inspiration to serve up mind-blowing confections.

"In the 20-some-odd years I've been [in] this business, this crazy business," says Thiessen, "I feel most like my character this time. I aspire to be Elizabeth Burke every day."

Thiessen shares a similar relationship with her own husband, actor Brady Smith, and she says it was the Burke's strong marriage that drew her to the role.

"It's one of the first scripts that I've read in a really long time, that [included] a marriage that actually works. Most of the time marriages on TV are filled with drama and affairs and distrusting each other and it's all the opposite with the Burkes, which is what I really, really enjoy about the relationship."

"You don't see a lot of strong women have strong marriage relationships on TV," she continues. "You just don't see it very often, so that was one thing that I really, really enjoyed reading [in] the script and really falling in love with Elizabeth."

Willie Garson on "White Collar," Toupees, & Everything in Between

Willie Garson is no stranger to television. He has appeared in over 250 episodes of a varitey of series, including series such as Buffy the Vampire Slayer, The X-Files, Sex and the City,and Stargate SG-1. He has also worked on over seventy feature films, including There's Something About Mary, Being John Malkovich, and Sex and the City and its sequel, to name a few.

Garson's latest endeavor has been his work on USA Network's White Collar, which is now in its second season, in which he plays the role of Mozzie.

Garson recently sat down with members of the digital media to discuss his role on White Collar.

Henry Winkler is a veteran television actor, his credits spanning almost 40 years. He is probably best known for his role as Arthur 'Fonzie' Fonzarelli, a character that was made popular on the series Happy Days. He however has numerous other television credits to his name, including The Practice, Arrested Development, and Numb3rs, to name just a few. Winkler has a long list of film credits as well, including Holes and Click, as well as many television movies.

Winkler has also served as a director and producer for different projects, including the popular series McGuyver, for which he was an executive producer.

Henry Winkler recently sat down with the digial media to discuss life and his work on USA Network's Royal Pains, where he plays the character of Eddie R. Lawson.

Sam Witwer on Life as a Vampire in "Being Human"

Syfy's newest scripted series, Being Human, follows the lives of Aidan, the vampire, played by Sam Witwer, a werewolf named Josh, played by Sam Huntington, and Sally, the ghost, played by Meaghan Rath, as they live together as roomates trying to retain their humanity.

Witwer's character was a Revolutionary War soldier, who, to spare his men, sacrificed himself to vampires. He struggles with his blood addiction and works to try to escape from under his mentor, Bishop's (played by Mark Pellegrino), control.

Sam Witwer has appeared in other television series in the past, such as the popular series Battlestar Galactica, Dexter, and Smallville, to name a few. He has appeared on film in movies such as The Mist and Gamer. He has also lended his voice to projects such as the television series Star Wars: The Clone Wars, and various video games, including the popular Star Wars: The Force Unleashed, and its sequel.

Witwer sat down with the media to discuss his new series and other projects.

Royal Pains, USA's hit original series which is currently in the second half of its second season, stars Mark Feuerstein as Dr. Hank Lawson. Lawson, after being blacklisted from the medical community, becomes a concierge doctor to the Hampton's rich and famous. He also treats the less fortunate at the local clinic. The show also stars Paulo Costanzo, Reshma Shetty, Jill Flint, and Henry Winkler.

Feuerstein first got his break on television as a recurring character on the soap opera Loving. He has continued his work in theater, film, and television. He made his Broadway debut in Alfred Uhry's The Last Night of Ballhoo.

On the silver screen, Feuerstein has appeared in movies such as Albert Brook's The Muse, which was his favorite role, What Women Want, and In Her Shoes.

On television Feuerstein has had starring roles in the series Fired Up, Conrad Bloom, Good Morning Miami, 3 lbs, and of course, Royal Pains. He has also appeared in series such as Caroline in the City, The West Wing, and The Hustler, for which he wrote, directed, and produced.

Feuerstein sat down with the digital media to discuss life and his work on Royal Pains.

When Hilarie Burton developed the acting bug, she moved to New York for school and to pursue her dream. Shortly after she was hired to be a VJ on MTV. It was after this that she got the role that she is probably most known for, that of Peyton Sawyer on he CW's One Tree Hill. During that time she also took on some movie roles such as Our Very Own, Solstice, and the Secret Life of Bees.

In 2010 Burton won the role of Sara Ellis on the hit USA original series, White Collar, the insurance investigator that often butts heads with con artist Neal Caffrey, played by Matt Bomer. The series revolves around Neal and his unlikely partnership with FBI agent Peter Burke, played by Tim DeKay. White Collar is presently in second half of the season two and airs every Tuesday at 10pm/9pm central.

Burton sat down to talk to the online media to answer questions about her life and her role on the show.

Just when you thought Lost was gone...

It was bound to happen. Fringe was craeated by Lost creator JJ Abrams. He has two of TV's best writers at the helm. I had to think to completely understand the latest episode; I haven't had to do that since Lost. Fringe continues to be, in this writer's opinion, the best show on TV. Unfortunately the ratings don't show it. Aside from all that though, this past Friday's episode was the best and worst episode of the season at the same time. What starts out as a monster of the week episode turns into the most revealing episode yet.

Deborah Gibson & Tiffany Battle it Out on "Mega Python vs Gatoroid"

On Saturday January 29th 80's pop icons Debbie Gibson and Tiffany worked together for the first time in the Syfy original movie Mega Python vs. Gatoroid. A fanatical animal rights advocate (Gibson) steals exotic snakes from pet stores and sets them free in the Florida Everglades. Here they grow to extremely large sizes. Seeing this as a threat to the Florida Everglades, a park ranger (Tiffany) injects the swamp's alligators with large amounts of steroids, increasing their size to battle the snakes. The end result is a battle for the ages. This was the second monster movie for both ladies as Gibson previously starred in Mega Shark vs Giant Octopus, while Tiffany starred in Mega Piranha.

At the tender age of sixteen Debbie Gibson was the youngest person ever to write, produce, and perform a number one single (Foolish Beat). Through the years Gibson has been a constant entertainer; when not making albums she's had a very successful theater run, starring in many of Broadway's top plays.

Tiffany performed on Star Search at the age of twelve before she was discovered. Like Gibson, Tiffany has been a constant performer. When not singing, she has been acting, doing many guest spots on TV shows.

Debbie Gibson and Tiffany sat down with the digital media to discuss their new project. 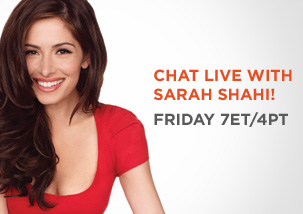 Join Sarah Shahi of Fairly Legal for a LIVE video chat this Friday at 4pm PST / 7pm EST! Sarah will be there to answer questions via text and video from fans during the chat, to get a more inside look at the show and her character. You can watch the live video chat right here on scifivision tomorrow night. The video will be available once the chat goes live.