Tonight the second season of Falling Skies will come to an end on TNT. In preparation of the finale I recently talked to Peter Shinkoda, who plays Dai on the series.  He talked about his role on the show as well about the finale. This is part one, part two of this exclusive interview with SciFi Vision is linked below. 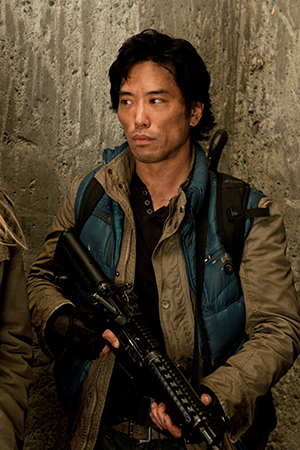 Shinkoda first found out about the role from his manager. "I was told by my manager that something was shooting in my native Canada. And I read for it...I read the little character description, the physical description...and I was like "Hey, that's really kind of right up my alley." I was very surprised that I had not read for this.

"The first two casting directors who were called - we were very late in the game, they were supposed to start shooting in 5 or 6 days in Toronto, Canada - and my manager called up those two...They said, "It's too late in the game, in a matter of hours we're offering it to two actors." But then my manager got a hold of Leslee Feldman and Scott Lesser; they saved my life...She said, "Send over your guy's stuff. I'm going to give you the material right now, I need it in under an hour."

"I went in there, I sent it within an hour, looked it over a couple times, sent in a video audition online and about five minutes later they responded to my manager and said, "You know what, we're going to hold off on the offers here and just run it by the brass, Steven Spielberg."

"And in another 48 hours she and Steven watched it and he signed off. So I was ready to come down for a screen test to Los Angeles, but she said that wasn't necessary, "That's it; you're off.  Start acting, there's no screen test. You're off the hook."

[quote]I like the fact that I contributed to working with Steven [Spielberg]. That will always be on my resume; that will never go away.[/quote]
"And I got it, just like that. Things come together. I should have bought a lottery ticket that day. I was quite right for the role anyway, but it's a timing thing; a moment later I could have missed it. It's a matter of minutes that I got the role, I was lucky enough to get the role. It could have gone either way but in the end it turns out that I was the right guy to play it. It worked out."

The actor's favorite part about working on the series was the connections he made and the people he worked with and learned so much from. "I don't know if this is a tangible thing, but I like the fact that I contributed to working with Steven [Spielberg]. That will always be on my resume; that will never go away. I like the idea of that.

"But the other favorite part is developmentally, as an actor, I got to go out there and spend that extensive time on the set and learn and see all the personalities and make a lot of great friends. That was very important to me. I enjoyed the process, the interaction with all the creatives, the crew and the cast over the last two years. I loved that.

"Professionally speaking, I have a wealth of knowledge now that eluded me before. I learned so much from being physically on the set, learning from the pros and the vets like Will [Patton], like Noah [Wyle]. 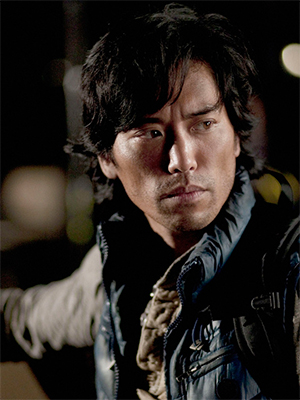 "You know, you're stupefied all day watching the process, how easily Noah can just walk into his role. He can be hamming it up, tap dancing or something, doing Charlie Chaplin or Salvador Dali, and all of a sudden he's in a John Woo Mexican standoff, and it's intense, and you can see the sweat coming down his head and it's real and he makes it look easy.

"And I've seen things like Will Patton's process, all the successful actors that you see onscreen, amazing [with] different processes."

Some of the actors get really into their characters, including Patton. "This may be the first time it's ever happened, I walked into a makeup trailer and I met Will a few times...One of the first days of shooting he's calling me "Dai" all day.  And I go to Mpho [Koaho], who plays Anthony, "What's he calling you?" He said, "He's always calling me Anthony." I'm like, "He's been calling me Dai all day!"

"He was talking to me as that character, so he really fell deep into his character, he lived his character. He's very much an actor like that, he's very method - I guess he lived this experience and lived through his process.

"And the process is different on every individual level, with each personality, but I'm learning all the time appreciating and enjoying it, from moment to moment. And without this show I would have never had all these ideas, they weren't evident to me. And now I've seen them, I've lived through them, and I have an appreciation for it and I'm a better person for it, because of it."

The characters on Falling Skies get to use a lot of weapons, and it was no different for Dai. "We walked in on one of the first days of military training, I think it was maybe our second or third day, we had a table read through in Toronto. And like any new show, you have your makeup test, your wardrobe test, and your hair test. Part of our wardrobe test, or look test, was how they accessorize each of us as characters. So we got to go in and take pictures of our wardrobe and whatever hair that they chose.

"We had to go in and get suited up, geared up with our weapons. So when we walked into one of the stages over at Primewood in Toronto, which is the biggest stage in Canada I believe, it might be in North America now.

"...As we walked in there, they have a massive space and they have those fold-out long tables that you have with the legs and you put them beside each other. They have six or seven of those tables and they're long, they're about ten feet, twelve feet long - each table, packed with weapons. Everything.

"There was a ball and chain and stuff like that. A bear trap, for bears. Like there were African spears; they had rusting machetes.  And then I see like six machetes and I'm like "What the hell? What is this? This is like the Caribbean revolution, what is this? Machetes?" 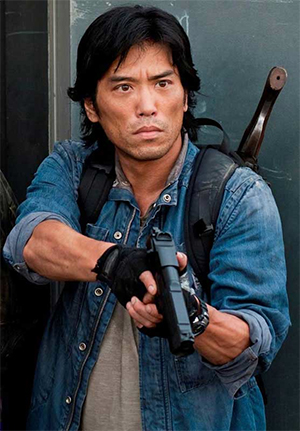 "So we go in there and we're all walking around and they're like "Everybody don't touch." The armorer is there and we all introduce ourselves and he goes, "OK, the producers want us to gear you up. What's going to look good? What can you handle? What gun can you handle holding up, what is going to fit your wrist, what's going to look beautiful with the jewelry and hair color," that kind of thing. "So we're moments away. Each one of you is going to suit up with the gun that you desire."

"[Then] "Who's playing Dai?" He's looking around at all these Caucasian people, I'm going "You're looking the wrong way. I'm playing Dai."

"I remember distinctly [someone] going "Oh man, you got the MP5?" I said "What?" and he goes "That's the flashiest, sexiest gun. It's like the universal gun for all kinds of SWAT in every city. It's badass, close quarters." He knew everything about it. [The armorer] goes, "Yeah, whatever, Peter Shinkoda gets the MP5, not you." And then he goes "Look over here," and I said "Look at this shiny pistol, this one's chrome plated," and he goes, "No, no, no, you get this one." And he pulled the Desert Eagle, the Israeli made Desert Eagle, and he gave that to me.

"So I was fitted right from the beginning; it was very conceptualized. Not necessarily my look, but definitely my guns and my intentions. That was fully fleshed out before I even had a say."

You can watch Shinkoda with some of those weapons tonight on the season finale of Falling Skies and read part two of the interview.
Twitter
BotonSocial por: SocialEmpresa
Category: Interviews