The new film Upside Down comes to theaters March 15th. The following is part of some press notes that were released recently, as well as a link to some promotional photos. More info will be released as it is available.

Written and directed by Juan Solanas

Kirsten Dunst (Spider-Man, Melancholia) and Jim Sturgess (Cloud Atlas, Across the Universe) star in Upside Down, an interplanetary dystopian romance about a young man's search for the long-lost girl of his dreams. Written and directed by award-winning filmmaker Juan Solanas and set in twinned worlds with opposite gravities, the film puts an eye-popping, original twist on the classic tale of forbidden love. 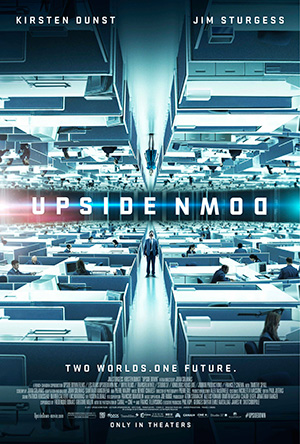 Lovers Adam (Sturgess) and Eden (Dunst) are separated not just by social class and a political system bent on keeping them apart, but also by a freak planetary condition: they live on twinned worlds with gravities that pull in opposite directions—he on the poverty-stricken planet below, she on the wealthy, exploitative world above. The planets are so close that their highest mountain peaks almost touch. That's where Adam and Eden first meet as children. And later, as teens, where he pulls her down to his world by a rope to cavort in dual-gravity bliss (visiting the other planet does not release a person from the gravitational pull of their native planet). But when interplanetary border-patrol agents attack them, Eden falls back to her world—apparently dead.

Ten years later, Adam learns that Eden is alive and working at TransWorld—a vast corporation whose towering headquarters is the only structure that connects the planets—and the only legal means of passing between them. In a desperate attempt to find her, Adam gets a job at TransWorld developing a revolutionary face-lift cream based on a secret, gravity-neutralizing ingredient that has been passed down for generations in his family. From his lower-world cubicle, he quickly sets about infiltrating the upper-world executive suites to reconnect with Eden.

And so begins a quest fraught with dangers and challenges—from having to woo Eden all over again because of the memory loss she suffered in the fall, to fleeing authorities through a topsy-turvy realm where up is sometimes down and down is sometimes up. Upside Down is a visually stunning romantic adventure that asks the question: what if love was stronger than gravity?