Fear the Walking Dead: The Complete Fourth Season Comes to Blu-ray and DVD 3/5

In Season 4 of “Fear the Walking Dead,” we will see the world of Madison Clark (Dickens) and her family through new eyes — the eyes of Morgan Jones (James), who is joining the story from the world of “The Walking Dead.” The characters’ immediate pasts mix with an uncertain present of struggle and discovery as they meet new friends, foes, and threats. They fight for each other, against each other, and against a legion of the dead, and work to build an existence strong enough to resist the crushing pressure of lives coming apart. There will be darkness and light; terror and grace; and the heroic, mercenary, and craven, all crashing together toward a new reality for “Fear the Walking Dead.”

The home entertainment release of “Fear the Walking Dead” Season 4 includes four different audio commentaries with cast and crew, providing an in-depth, personal account of how episodes 401, 405, 410, and 416 were made. The “Fear the Walking Dead” Season 4 Blu-ray and DVD will be available for the suggested retail price of $44.99 and $39.98, respectively. 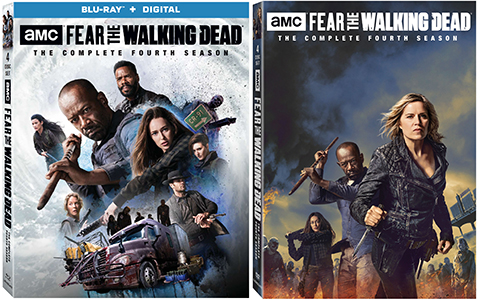 
ABOUT LIONSGATE
The first major new studio in decades, Lionsgate is a global content leader whose films, television series, digital products and linear and over-the-top platforms reach next generation audiences around the world.  In addition to its filmed entertainment leadership, Lionsgate content drives a growing presence in interactive and location-based entertainment, video games, esports and other new entertainment technologies.  Lionsgate’s content initiatives are backed by a nearly 17,000-title film and television library and delivered through a global sales and distribution infrastructure.  The Lionsgate brand is synonymous with original, daring and ground-breaking content created with special emphasis on the evolving patterns and diverse composition of the Company’s worldwide consumer base.
Twitter
BotonSocial por: SocialEmpresa
Category: DVD News