“The DUFF…the Mean Girls of this generation”
- Perezhilton.com 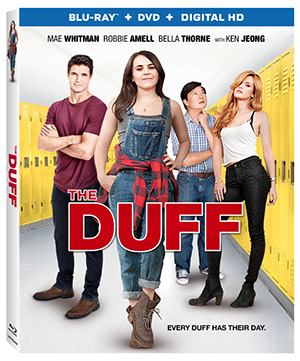 Bianca’s (Whitman) universe turns upside down when she learns that her high school refers to her as a “DUFF” (Designated Ugly Fat Friend). Hoping to erase that label, she enlists the help of a charming jock (Amell) and her favorite teacher (Jeong). Together they’ll face the school’s mean girl (Thorne) and remind everyone that we are all someone’s DUFF…and that’s totally fine.

Special features on the home entertainment release of The DUFF include three featurettes looking at the making of the film, a look behind the scenes at the premiere, character profiles and a gag reel. The DUFF will be available on Blu-ray and DVD for the suggested retail price of $39.99 and $29.95, respectively.

ABOUT LIONSGATE
Lionsgate is a premier next generation global content leader with a strong and diversified presence in motion picture production and distribution, television programming and syndication, home entertainment, digital distribution, channel platforms and international distribution and sales. The Company currently has more than 30 television shows on over 20 different networks spanning its primetime production, distribution and syndication businesses, including such critically-acclaimed hits as the multiple Emmy Award-winning Mad Men and Nurse Jackie, the comedy Anger Management, the broadcast network series Nashville, the syndication success The Wendy Williams Show, the critically-acclaimed hit series Orange is the New Black and new series such as The Royals, Manhattan, Deadbeat, Casual and Chasing Life.

Its feature film business has been fueled by such recent successes as the blockbuster first three installments of The Hunger Games franchise, the first two installments of the Divergent franchise, Now You See Me, John Wick, Warm Bodies, CBS Films/Lionsgate’s The DUFF, Roadside Attractions' A Most Wanted Man, Lionsgate/Codeblack Films' Addicted and Pantelion Films' Instructions Not Included, the highest-grossing Spanish-language film ever released in the U.S.

Lionsgate's home entertainment business is an industry leader in box office-to-DVD and box office-to-VOD revenue conversion rates. Lionsgate handles a prestigious and prolific library of approximately 16,000 motion picture and television titles that is an important source of recurring revenue and serves as the foundation for the growth of the Company's core businesses. The Lionsgate and Summit brands remain synonymous with original, daring, quality entertainment in markets around the world. www.lionsgate.com
Twitter
BotonSocial por: SocialEmpresa
Category: DVD News