It’s All About the Beasts!

Season 4 DVD Roars On with Collectable Bestiary Booklet and Special Feature Showcasing Beasts Throughout the History of Beacon Hills!

“Teen Wolf” Season 4
Still healing from tragic losses, Scott, Stiles, Lydia and Kira return to a new semester of school with more human worries than supernatural, while also trying to help their new friend, Malia, integrate back into society. But Kate Argent’s surprising resurrection brings a new threat to Beacon Hills, along with the emergence of another mysterious enemy known simply as The Benefactor. 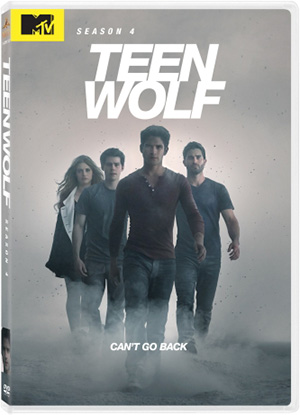 The “Teen Wolf” Season 4 DVD is all about the beasts with an all-new featurette, “The Beasts of Beacon Hills,” which showcases beasts throughout the history of Beacon Hills. In addition to the special features, extended episodes, gag reels and behind-the-scenes featurettes, fans who purchase the Season 4 DVD will also receive a collectable bestiary booklet for a limited time.

“Teen Wolf" was developed by Jeff Davis (creator, "Criminal Minds") who also serves as executive producer. Additional executive producers include Russell Mulcahy ("Highlander," "Resident Evil: Extinction"), Marty Adelstein ("Prison Break"), René Echevarria ("Medium," "Castle"), Tony DiSanto, and Liz Gateley. The pilot was written by Jeff Davis and Jeph Loeb & Matthew Weisman and directed by Russell Mulcahy. The "Teen Wolf" series is based on a Screenplay by Jeph Loeb & Matthew Weisman. Julie Schwachenwald, Dana Gotlieb-Carter and Alexandra James are the MTV executives in charge of production. The series is a co-production with, and distributed by, MGM, in association with Lost Marbles Productions, Inc., Siesta Productions, Inc., First Cause, Inc. and DiGa.

About Metro-Goldwyn-Mayer
Metro-Goldwyn-Mayer is a leading entertainment company focused on the production and distribution of film and television content globally. The company owns one of the world’s deepest libraries of premium film and television content.  In addition, MGM has investments in domestic and international television channels and is the majority owner of and distributor for United Artists Media Group (UAMG). For more information, visit www.mgm.com.