BEVERLY HILLS, CA – On March 17th Anchor Bay Entertainment releases AMC’s powerful Revolutionary War drama “TURN: Washington’s Spies: The Complete First Season” on Blu-ray™ + Digital HD and DVD. Available as a 3-disc set, “TURN: Washington’s Spies: The Complete First Season” contains all 10 episodes from the series that tells the true story of spies during the American Revolution who helped give birth to modern spycraft and gave freedom to our country. The release is also fully loaded with insightful bonus features about the making of this thrilling series including featurettes and deleted scenes. SRP for Blu-ray™ + Digital HD is $59.99 and $49.98 for DVD. Pre-book date is February 4, 2015. 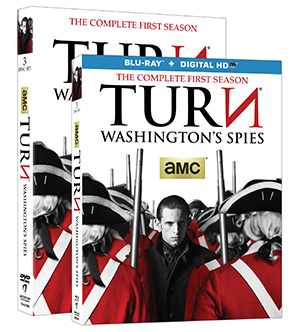 A character-driven drama set during the Revolutionary War, “TURN: Washington’s Spies: The Complete First Season” takes us behind the battlefront to a shadow war fought by everyday heroes who vowed to keep their heroics a secret. Based on Alexander Rose’s book “Washington’s Spies,” “TURN: Washington’s Spies,” centers on Abe Woodhull, a farmer living in British-occupied Long Island, who bands together with a disparate group of childhood friends to form the Culper Ring.  Together they risked their lives and honor, and turned against family and King, for a fight they believed in passionately, ultimately helping George Washington turn the tide of the Revolutionary War in favor of the rebels.  Their daring efforts also revolutionized the art of espionage, giving birth to modern tradecraft as we know it today, along with all of the moral complexity that entails.

Season two of “TURN: Washington’s Spies” will premiere on AMC Spring of 2015.

About AMC
Whether commemorating favorite films from every genre and decade, or creating acclaimed original programming, AMC brings to its audience something deeper, something richer, Something More. The network reigns as the only cable network in history ever to win the Emmy® Award for Outstanding Drama Series four years in a row with “Mad Men,” and six of the last seven with current back-to-back honoree, “Breaking Bad.” The network boasts the most-watched drama series in basic cable history and the number one show on television among adults 18-49 for the last two years with “The Walking Dead.” AMC’s original drama series include “Mad Men,” “Breaking Bad,” “The Walking Dead,” “Hell on Wheels,” “TURN: Washington’s Spies,” “Halt and Catch Fire” and the forthcoming “Breaking Bad” prequel “Better Call Saul,” “Humans” and “Badlands.” AMC also explores authentic worlds and discussion with original shows like “Talking Dead” and “Comic Book Men.” AMC is owned and operated by AMC Networks Inc. and its sister networks include IFC, SundanceTV, BBC America and WE tv. AMC is available across all platforms, including on-air, online, on demand and mobile. AMC: Something More.