Experience the Stunning Cinematography on Blu-ray 3D With Over Two Hours of Bonus Material Including Deleted Scenes, Making Of Featurettes,
Inspirational Artwork and More

LOS ANGELES, CA. (Jan, 29, 2013) – Believe the unbelievable.  Twentieth Century Fox Home Entertainment presents a groundbreaking cinematic experience you will have to see to believe when LIFE OF PI debuts on stunning Blu-ray 3D, Blu-ray and DVD from March 8 internationally and on March 12 in North America. Based on the acclaimed best-selling novel from Yann Martel that has been published in 40 languages, and brought to life by visionary Academy Award winning director Ang Lee (Brokeback Mountain, Crouching Tiger, Hidden Dragon), this magical adventure of hope, wonder, survival, and the power of the human spirit has been celebrated by critics all over the world 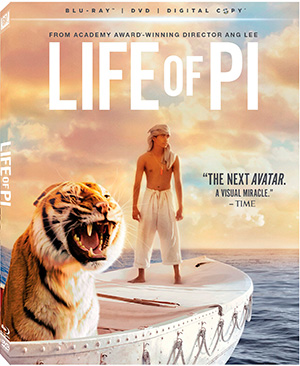 A “magnificent and moving” (Peter Travers, Rolling Stone) motion picture event that has been hailed as “a masterpiece” (Betsy Sharkey, Los Angeles Times), taking in over $500 million in worldwide box office.  LIFE OF PI follows Pi Patel, a young man on a fateful voyage who, after a spectacular disaster, is marooned on a lifeboat with the only other survivor, a fearsome 450 lb Bengal Tiger named Richard Parker. Hurtled into an epic journey of adventure and discovery Pi and his majestic companion make an amazing and unexpected connection.

With incredible cinematography from Oscar nominee Claudio Miranda** (The Curious Case of Benjamin Button, Tron: Legacy) and masterful performances from newcomer Suraj Sharma, Irrfan Khan (The Amazing Spider-Man, Slumdog Millionaire), Rafe Spall (Prometheus, Anonymous) and Gerard Depardieu (Paris, je t’aime, City of Ghosts), the LIFE OF PI Blu-ray 3D is loaded with over two hours of behind-the-scenes special features, including deleted scenes that will make you rethink the story (also presented in 3D), five featurettes that dive into the making of the visual spectacle, 60 pieces of inspirational artwork, storyboards and more.  Prebook is February 13.