From the directors of Little Miss Sunshine comes a “charming and delightful” (Marshall Fine, Huffingtonpost.com) romantic comedy starring Paul Dano and writer-actress Zoe Kazan.  Struggling with writer’s block and a lackluster love life, once-famous novelist Calvin (Dano) creates a beautiful fictitious character named Ruby (Kazan) who inspires him. But not only does this bring his work to life- it also brings Ruby to life- literally! Face-to-face with an actual relationship with his once virtual girlfriend, Calvin must now decide whether to pen this love story or let it write itself. Also starring Annette Bening, Antonio Banderas and Elliott Gould, Ruby Sparks is a smart coming-of-age story that proves true love can be remarkably magical. 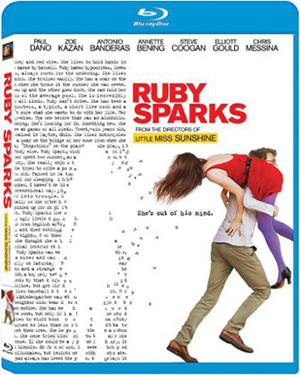 DVD & Blu-ray Special Features:
*    Behind the Story
*    Real-Life Couples: Co-Stars & Directors
*    Be Careful What You Wish For
*    Theatrical Trailer
*    Sneak Peeks of: The Sessions, The Blu-ray Experience and Lola Versus

Blu-ray Exclusive Special Features:
*    Getting to Know the Cast
*    Los Angeles: The Other Character