This Time it’s Personal
On Blu-ray™ and DVD August 28, 2012
From Anchor Bay Entertainment

BEVERLY HILLS, CA – Attention all guidos and guidettes – get out of the water! On August 28th, Anchor Bay Entertainment will release on Blu-ray™ and DVD the movie Jersey Shore Shark Attack. This genre-busting film, which aired as a Syfy Saturday Original Movie on June 9, follows a crew of Jerseyites who band together against killer sharks that threaten to spoil their summer fun by eating them alive. An entertaining and outrageous action-thriller, Jersey Shore Shark Attack features a talented cast including Jeremy Luke (Interpretation), Melissa Molinaro (“Making the Band 3”), Paul Sorvino (GoodFellas, Kill the Irishman), Jack Scalia (“All My Children”), Joey Fatone (N-Sync, “Dancing with the Stars”), Vinny Guadagnino (MTV’s “The Jersey Shore”), William Atherton (The Last Samurai, Die Hard) and Tony Sirico (“The Sopranos”). 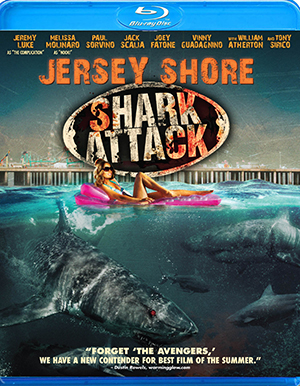 With summer in full swing and a record-breaking Fourth of July crowd soaking up the boardwalk sun, Seaside Heights is the place to be in New Jersey! But when an illegal coastal drilling operation inadvertently unleashes a horde of man-eating albino bull sharks, the city is hurled into a deadly chaos. Can a local Jersey crew band together to fend off the bloodthirsty, ravenous sharks before the whole town is consumed…or will these “Shore” hotties sleep with the fishes?

So get ready to fist pump with the kids from the “Shore” as they take to the ocean armed only with street smarts, big muscles and hair gel! Fuggetaboudit – this is Jersey Shore Shark Attack and it’s the most fun flick of the summer!