It's back, and bigger than ever, when Anchor Bay Entertainment releases the acclaimed Starz Original series "SPARTACUS: VENGEANCE - THE COMPLETE SECOND SEASON" on a muscular three-disc Blu-ray™ and DVD set September 11th. SRP is $59.99 for the Blu-ray™ and $49.98 for the DVD. Pre-book is August 15Th.From executive producers Rob Tapert, Sam Raimi, Joshua Donen and Steven S. DeKnight are all 10 memorable episodes, plus herculean amount of bonus features including 'Making of' featurette, behind-the-scenes, on-set footage with Liam McIntyre, bloopers and more! Plus Blu-ray™ contains audio commentaries and 9 extended episodes! 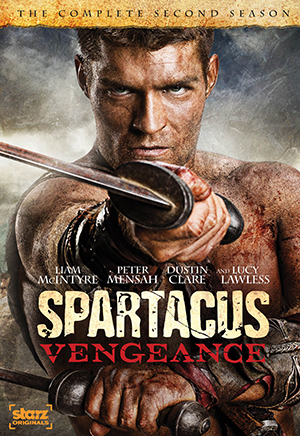 When it premiered January 27th on Starz, "SPARTACUS: VENGEANCE - THE COMPLETE SECOND SEASON" delivered the highly anticipated continuation of the epic series giving audiences even more spectacle, sex, swords and scandal! Liam McIntyre (Radev) takes on the role of Spartacus, with Lucy Lawless ("Xena: Warrior Princess") reprising her role as Lucretia. Peter Mensah (300) returns as Oenomaus, Manu Bennett (The Marine) as Crixus, Dustin Clare ("Underbelly") as Gannicus and Craig Parker (The Lord of the Rings: The Two Towers) as the cruel Gaius Claudius Glaber.

"SPARTACUS: VENGEANCE - THE COMPLETE SECOND SEASON" begins on the heels of the violent escape from the House of Batiatus that concluded "Spartacus: Blood and Sand," the gladiator rebellion continues and begins to strike fear into the heart of the Roman Republic. Gaius Claudius Glaber and his Roman troops are sent to Capua to crush the growing band of freed slaves that Spartacus leads before it can inflict further damage. Spartacus is presented the choice of satisfying his personal need for vengeance against the man who condemned his wife to slavery and eventual death or making the larger sacrifices necessary to keep his budding army from breaking apart. Containing all of the blood-soaked action, exotic sexuality, and villainy and heroism that has come to distinguish the series, the tale of Spartacus resumes in larger-than-life fashion.