We have 1662 guests and no members online

Star Trek fans from around the world will be beamed to Las Vegas on August 1 - 5 for the galaxy’s largest annual Official Star Trek Convention. Organizers anticipate that over 15,000 attendees will convene at this decade-long Las Vegas tradition at The Rio Suites Hotel. This Official Star Trek Convention (by Creation Entertainment) will be highlighted by special presentations including: special panels, presentations, celebrity guests and a exhibit with costumes and props from the new hit Star Trek television series Star Trek: Discovery, in person stage appearances by celebrities including William Shatner, Jason Isaacs, Kate Mulgrew, and many other celebrity appearances, themed parties, a costume competition and more! Read the full press release.

In preparation for the the convention, SciFi Vision is giving away 10 pairs of general admission tickets for single day admission to The Official STAR TREK Convention! 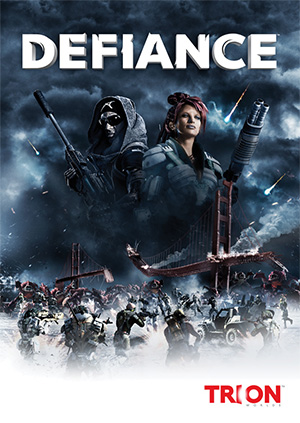 Our partners at Syfy have provided us with a standard PC-edition of Defiance the game. Join the futuristic online open-world shooter where thousands of players scour a transformed Earth competing for alien technology. Hunt alone or with others as you improve your skills and level up, unlocking powerful weapons that will help you survive the massive battles that await.

And, since the series impacts the game, the dynamic missions, massive co-op battles and the new world exploration never end.

To win please enter below. You must follow & tweet to win, but there are other ways to win to give you a better chance! Open to US residents only.

In preparation for the 100th episode of USA Network's Psych (which you can read more about here), SciFi Vision is giving away a Psych prize pack, courtesy of USA Network!


Here's what you could win: