Recently, the sixth and final season of fan-favorite Lucifer premiered on Netflix. The series follows Lucifer Morningstar (Tom Ellis), the Devil, and Detective Chloe Decker (Lauren German) who solve crimes for the LAPD.

On the series, Aimee Garcia plays the part of forensic scientist Ella Lopez. This season, Ella finally found out the truth about Lucifer and the world of celestials.

Garcia recently spoke to Jamie Ruby of SciFi Vision in an exclusive interview about working on the series, singing and dancing in the musical episode, the importance of representation, what she took from the Lucifer set, writing for Wonder Woman, and more. 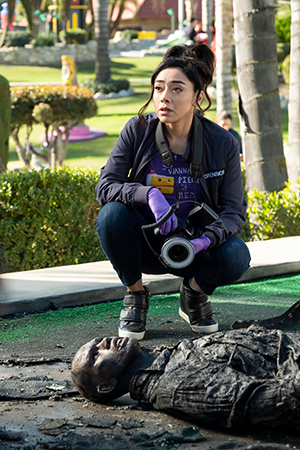 SCIFI VISION:   Can you talk about working with the choreography and the singing in the musical episode. I mean, it seems like it would be a lot of fun, but it also seems like it probably was really nerve wracking to have to do that.

AIMEE GARCIA:   Oh, yeah. I mean, I started out as a dancer, so that was actually really fun for me to go back and rehearse and work with professional dancers and train. Kevin Alejandro and I both were in the same rehearsal, and we were like kids in a candy store. We were so excited to learn the routine and practice it and have the backup dancers that make you look way cooler than you are. It was just so fun.

The singing I was a little nervous about, but, yeah, it was so fun and exhilarating, especially the football scene, because we were racing against the sun going down, and it was like two hundred extras and dancers and fancy cameras, and it was like Broadway. We had to do like a Broadway number before the sun went down. It was just such a high when everyone just showed up and did it. We were high-fiving, and it was it was great. But, yeah, I mean, anytime I get to sing and dance, I'm like, “Sign me up.”

Well, it came out really well. I still listen to the soundtrack on Spotify.

I love that. Everyone was pretty terrified.

I asked Kevin this, and he couldn't think of one, but maybe you can. What would Ella's theme song be, do you think, if she had one?

There's a part of me that wants to say Pharrell Williams’ “Happy.” She is a little love bug, and it's kind of catchy and just kind of makes you want to dance, but then I feel like it would be Eurythmics’ “Sweet Dreams,” because she also has that dark side. So, I feel like it has to be like a combo of those two songs.

When did you find out that Ella was finally going to find out about Lucifer, and were you excited? I know I was happy.

I was. I was really, really happy, because fans just kept asking me at Comic-Con, “Is she gonna find out?” I'm like, “I don't know. They keep me on a need to know; it’s like the military over here. I don't know anything.” Our writers are so secretive. I said, “I have no idea,” but I know that there was just like a hankering, you know, just desire from the fans - see what I did there - desire from the fans. So, I was thrilled, because I knew it meant that Ella was going to have a really cool arc this season. And in typical underdog fashion, the season was a bonus season, because we weren't supposed to get a sixth season. So, luckily for Ella, I think the writers probably looked at what characters were left to have major arcs. They're like, “Well, Ella hasn't gotten the memo, so let's fill her in.”

Were you satisfied overall with the ending both that she and the show received?

I just kept wanting to watch one more episode and one more episode. I think it's a beautiful, bittersweet ending, but I think they really handled each character with so much care, and it was organic. It felt natural; it was beautiful. It was definitely a tear-jerker, but it just evolved so naturally and organically that I can't imagine an alternate ending.

One of the things that I liked was how they had Lucifer make the foundation in her name. Can you talk about what it means to you for Ella to be such a role model for young women that are interested in math and science and all that? 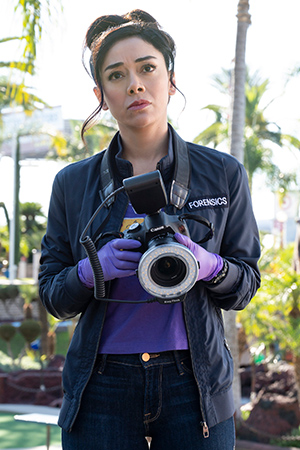 Yeah, that's one of the things I love the most about this show and this particular character is her representation of girls and women in STEM. At these cons all over the world, young people would cosplay her character, and it was very touching to me, because she's not a superhero. She doesn't have wings; she's not a demon…I mean, she just wears these t-shirts, and she's a woman of science.

So, it really was so inspiring for me to see young girls come up to me at these cons and say, “Hey, I'm majoring in biology now because of Ella.” And I have some science teachers come up and say, “Hey, I actually play your scenes from Lucifer of Ella in the lab, because your character makes science cool, and I want to encourage my students to get excited about science, so thank you for portraying such a positive role model on screen, especially for women of color.” And, you know, I'm like a hot mess of tears. It's just, I think representation really matters. When I was a kid, a character like Ella didn't exist. We didn't have Dora the Explorer, and we didn't have the representation that we have now. I don't think, even still, there're a lot of forensic scientists of color on TV, and there's two hundred plus shows. So, it's been so wonderful to see the fandom praise her light. And she’s a woman of faith.

It's really important, representation. It sounds a little overused these days, but representation really does does matter. I mean, people are very affected by what they see, if they see someone who looks like them or someone that they relate to who may not look like them at all. I mean, I have twenty five year old tatted guys that come up to my booth, and they’re like, “You’re me.” I'm like, “Okay, great.” Like, “Ella is me.” And I thought, all right, there is. So many different types of people see themselves in Ella, and it's wonderful. So, I was so happy that Ildy [Modrovich] and Joe [Henderson] decided to have her lean into that for final story, and it's the perfect ending for her.

I think she has other sides though, too. I think I kind of connect just with her being like a geeky fan of things, which is always fun. She doesn't apologize for that.

So, you mentioned her shirts. You've probably been asked this before, but do you have a favorite shirt that you can think of? Or a couple?

I love the vampire “Mornings Suck” t-shirt with a vampire holding coffee, and my second favorite is the taco shirt saying, “Every now and then I fall apart.”

Yeah. They're all funny. They're cute.

Those two are my winners.

Not necessarily shirts, but it just made me think of it. Is there anything that you were given or that you kept from the set as a memory?

I did take Ella's jacket, her jean jacket. So, I do wear that in my personal life. I feel like it's a little Ella hug out in the streets. So yes, I have Ella's jacket with black stars on the back, her gray jean jacket.

So, just out of curiosity, I don't even know if you've thought about this, but if there was a season seven, what would you have liked to have seen happen with Ella? Is there anything you would have liked to have gotten to do that you didn’t?

I would have liked to have done some action stuff. I think that would have been really fun, like a Maze (Lesley-Ann Brandt)/Ella kind of team up or [something]. 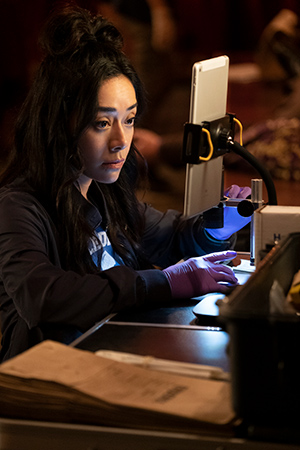 And I think it'd be fun to have like - I mean, she did cosplay Star Trek, but I think it'd be really fun to have her cosplay some random character that no one really knows, and then something happens at a con, and she's got to figure out, you know, whodunnit or something.

So, that would be really fun, but, yeah, I’ve always kind of wanted to get involved in some like, angel-demon fight. That would have been great if I could just sucker punch a demon that was trying to hurt Chloe. That would be fun.

The other thing I wanted to ask you about is I know you have a comic book. I caught part of your live Instagram video about a comic book that came out, and you got the movie script that you're writing. Can you talk a bit about that kind of stuff that's coming out?

Sure. I started writing with my partner named AJ Mendez, who's a total badass. The Wonder Woman comic that came out I wrote by myself, and it has a little shout out to Lucifer fans. There's a little easter egg in there. I created a fifteen-year-old Latina named Sophia, who is the star of the story, and she ends up stealing Wonder Woman's lasso, and then, shenanigans ensue. She has got thick Coke bottle glasses, like another forensic scientist we know, and she may or may not resemble a hugger that we all know and love. I'm really excited about that. I've been keeping it a secret for nine months, so it's been really nice to be able to share it with the world.

Then, AJ and I started a production company called Scrappy Heart, and we wrote the sequel to 47 Ronin, which is really exciting, because it's an action genre, and we got the opportunity to write for strong female leads and a diverse cast. It was very fulfilling to be able to write audition scenes. I would have friends of mine, say, “Hey, I just went in to audition for 47 Ronin, and your writing is so good, you and AJ.” Like, “I did this scene and this scene, and fingers crossed.” And I got a little teary eyed, because I thought, “Oh, gosh, this is such a different level of fulfillment of being able to open the doors for the next generation and kind of, you know, really create the change you want to see behind the camera, behind the comic, or behind the screenplay. So, it's been really great, and we're obviously developing a few things that we're very excited to move along, and, hopefully, we'd love to stay in the genre space.

But whenever I wasn't shooting Lucifer, I would just spend my time writing. It's been incredibly fulfilling, and I’m very inspired by the fans. We just write stuff that we think is cool and we would want to watch, and we're big dorks ourselves…I’m like, “Well, this is kind of dorky and fun, and hopefully other people will think it's fun too,” and so far, so good.
Twitter
BotonSocial por: SocialEmpresa
Category: Interviews