In Monday's episode "The 40th Floor," Mulgrew plays "Jane," a Regent of Warehouse 13 who becomes vitally important to the survival of the Warehouse, while revealing a complex past with one of the agents. As the war on the Regents continues, Jane must make a bold decision that has far-reaching impact on both the Warehouse and the team. 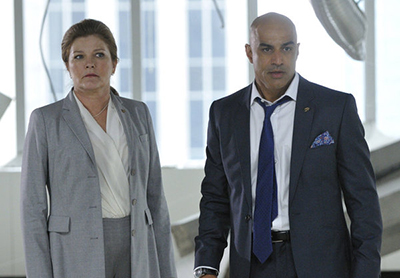 Also guest starring will be Sasha Roiz (Grimm), who will return as the sinister Marcus Diamond.

The most successful series in Syfy history, Warehouse 13 follows a team of government agents who work at a massive, top-secret storage facility in windswept South Dakota which houses every strange artifact, mysterious relic, fantastical object and preternatural souvenir ever collected by the U.S. government. The Warehouse's caretaker Artie Nielsen (Saul Rubinek) charges Pete Lattimer (Eddie McClintock), Myka Bering (Joanne Kelly), young apprentice Claudia Donovan (Allison Scagliotti) and newcomer Steve Jinks (Aaron Ashmore) with chasing down reports of supernatural and paranormal activity in search of new objects to cache at the Warehouse, as well as helping him to control the Warehouse itself. CCH Pounder plays the Warehouse's mysterious caretaker, Mrs. Frederic.

Warehouse 13 is produced for Syfy by Universal Cable Productions. Jack Kenny (The Book of Daniel) is executive producer and showrunner.