Another episode of the popular series Leverage: Redemption dropped today on Amazon FreeVee. On the series, Gina Bellman, who recently spoke with SciFi Vision, stars as Sophie Devereaux, “The Grifter,” and as such she takes on a lot of different identities that she gets to create. “As good as the writing is, sometimes, it's not on the page, and maybe that's partly because they trust us,” the actress explained to the site during the interview. “[For example] this season, I had to play a reporter, and it just said, you know, ‘reporter’ on the page, but I sort of went away, and I was like, ‘Okay, I want to be like a real kind of old school reporter. She's going to wear a three-piece linen suit, and she's going to smoke a pen.’ It just becomes a language that you speak, and that probably might sound really pretentious, but you start to read the scripts, and it kind of jumps off the page, and you can see the people. You can see the character in very kind of vivid ways…Sometimes I can just read, you know, ‘Sophie's gets out of the car dressed as a reporter,’ and I build something just from that from the first thing that pops into my head.” 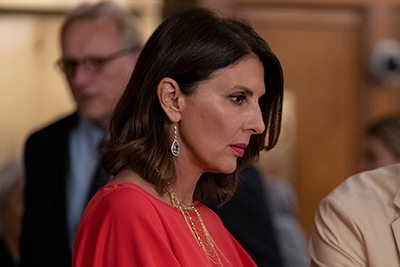 During the interview she also talked about one of her favorite identities, which is later in the season. “There's an episode called ‘The Work Study Job,’” said Bellman. “I created a character in that episode where I play a science professor, and I took some elements from some other con characters that I played. I took elements of the character from ‘The First Contact Job’ and elements from the character on from ‘The Office Job,’ and I put them into this science professor. I did this sort of fun, quirky kind of kooky character. The kookier or the better for me. That's where I'm really in my happy place.”

Other topics Bellman discussed were what’s to come throughout the season, her favorite costume, and more. Watch the full interview below!