In the film Old, which SciFi Vision was provided on 4K for review, Guy (Gael García Bernal) and Prisca Cappa (Vicky Krieps) are about to get a divorce but decide to take one last family vacation before breaking it to their two children, 11-year-old Maddox (Alexa Swinton) and 6-year-old Trent (Nolan River). Prisca is elated to find such a great deal for a resort online, and when they get there, they are offered access to a secluded too-good-to-be-true beach. They are not completely alone, however, as another family, including surgeon Charles (Rufus Sewell), his wife Chrystal (Abbey Lee), their 6-year-old daughter Kara, and his elderly mother, Agnes (Kathleen Chalfant) are offered the same access. Things get a little odd when the driver taking them to the beach (Shyamalan) gives them way too much packed food and sends them the rest of the way on foot. They soon discover that this paradise is even less exclusive and that it’s already occupied by rapper Mid-Sized Sedan (Aaron Pierre), and later another couple, nurse Jarin (Ken Leung) and Patricia Carmichael (Nikki Amuka-Bird).

Everything is fine until a body washes up on shore and accusations start flying. Things go from bad to worse when the adults notice that the children have aged by about five years. They also quickly discover that they are unable to leave, as they black out and end up back on the beach. Time continues to pass, and they realize that if they can’t get off the island, they may die of old age in the space of a day.

As with other films by Shyamalan, who both wrote and directed the movie, it can be quite dark and chilling at times. As much of it takes place in an open area on a beach, the seclusion and using the rocks and cliffs the way they did gives it that foreboding claustrophobia. The director found ways to make the alluring also feel sinister. 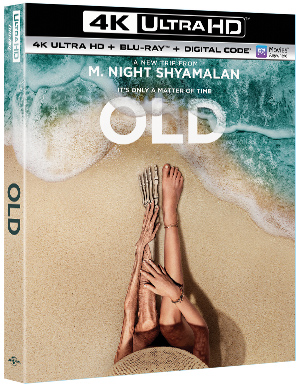 The film was shot beautifully and in such a way that the sweeping camera angels were not always focused on the action or who was speaking, but often on character reactions, which helped bring you to the middle of what was going on and make you feel a part of it. I feel it added to the storytelling in a positive way.

In general I found the film emotional and engaging; I came to care about the characters and the deaths were meaningful. The film did an excellent job of putting you into the middle of everything and making you feel like you were on the journey along with the characters. As much as the film is sort of a science fiction thriller, which I like, the movie was definitely saying something about how the time you have with those you care about is precious.

There were some moments that did, however, take me out of the film a bit, and mostly were to do with the science. Sometimes time seemed to jump rather than progress quickly (like how all of a sudden, the children are older), and the rate of progression definitely didn’t alway match up (like the growing tumor), but some of that I chalk up to getting story points across in a way that fit the tone and kept the tension, and I was able to suspend my disbelief. There were also a couple odd things they did to explain things away like the children growing out of their bathing suits (who takes multiple bathing suits down to the beach for the afternoon?), but it didn’t detract too much from the film.

Although I didn’t know most of the actors, the cast was well chosen and believable for the most part. I did feel the actor playing the teenage Trent (Alex Wolff) seemed a little out of place because he looked a little too old to play fifteen, although he was good in the role. It’s likely because they used the same actors to play the teens fairly far into adulthood, and a younger actor might have seemed even stranger playing an adult.

All in all, I was pleased with the film. It moved quickly, I never was bored, I appreciated the mysterious sort of elements and the twist at the end, and I definitely connected with the characters. I also think this is the kind of movie that can be appreciated a second time around to pick up on more things. I recommend the film for both fans of the genre and fans of Shyamalan’s work.

The bonus features of the film consist of five behind the scenes featurettes and ten deleted scenes that can be played all at once if you choose.

The special features were decent, and I enjoyed hearing about Shyamalana’s process, but none of them went very deep into filming aspects, and I would have liked more.

Deleted Scenes [8:16] - There are ten deleted scenes that you can choose to play one at a time or all together. None of them are anything that really needed to be kept in the film. Probably the most relevant that could have been left were “Trent’s Trunks,” where Trent’s father notices that his swim trunks are too small, and “Despair,” where Guy talks about how he is always scared of things worrying about the risks and that it’s no way to live and also Chrystal puts on make-up and talks to herself, clearly upset she’s aging.

Shyamalan Family Business [8:05] - Shyamalan talks about some of the inspiration for the film about children growing up so fast and time moving and how it’s important to be present. He talks about how his films always represent where he is in his life and often the ages of the children in his movies are the same as his own children who are now grown. His daughters worked with him on the film, Ishana as a second unit director, and Saleka wrote the song featured in the movie. His daughters also talk about the enjoyment they got in working with him.

All the Beach is a Stage [9:37] - Shyamalan talks about using the amorphous space of the beach to tell the story and using angles in the camera movements, as well as using continual camera movements to convey time passing. He often did not have many takes of scenes because he likens the way he filmed it to theater and being in the moment. The actors talked about working with Shaymalan and the way he shoots things differently. Shyamalan also talked about how although his films can be dark and disturbing, he does not view them as horror, which have that as a destination, but rather going through something and coming out the other side with a strong belief system.

Nightmares in Paradise [7:27] - Shyamalan and producer Marc Bienstock talk about searching the globe for the perfect location - they needed a private desolate beach and a spectacular resort, and they found a cove in the Dominican Republic. The production designer, Naaman Marshall also weighs in on the aspects of the location and on creating the huge wall around the beach. They also discuss difficulties they faced with it being hurricane season. Shyamalan says that they had limited time and could not have taken even one more day to shoot. Set dresser, Ico Abreau, and the crew touch on stray dogs that would sometimes walk into the shots and how two of them were adopted.

A Family in the Moment [6:18] - McKenzie, Krieps, Wolff, and Bernal talk about filming a really emotional scene on the beach and how they formed a deep connection and felt like family. Saleka talks a bit about getting to be there with her family watching the actors film a scene that was reflective of her own family. Shyamalan also talks about the actors bringing truth to the scene with their emotions as well as how when they were done filming on the beach they performed a ceremony and offered flowers back to the ocean because they were grateful.

Although I do recommend the film, I would not suggest purchasing it for special features alone, as there aren’t enough to warrant that. The movie itself, however, is an entertaining one that also is meaningful. It’s worth a watch and perhaps even a rewatch, especially if you are a fan of Shyamalan’s type of films.
Twitter
BotonSocial por: SocialEmpresa
Category: DVD Reviews