I'll tell you up-front that I've been a Star Wars fan ever since I was sixteen when the first movie came out. I was already a Trekkie and sci-fi fan, so I was just mesmerized by the original Star Wars and its colorful universe. You can't underestimate the effect that movie had on many of us. Good sci-fi films and TV shows were relatively rare back then, and special effects were pretty bad. When George Lucas made the first Star Wars movie, he not only created a completely original universe full of unusual aliens, planets, handsome heroes, and butt-kicking heroines, but he actually created new cameras and other techniques still used in film today. His vision was the most important factor driving the films. When Empire Strikes Back came out three years later, it was not only a great sequel but an even better movie. 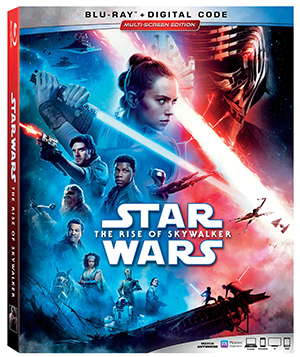 Since then, most of the Star Wars movies have been disappointing in one way or the other. Either the story was weak, it was depressing, or it just copied previous Star Wars plots. I had very low expectations for The Rise of the Skywalker, so I was pleasantly surprised that I liked it so much more than the previous movies. I was ecstatic that they brought back Han (Harrison Ford) (even though he’s still dead), Lando (Billy Dee Williams), Luke (Mark Hamill), and Leia (Carrie Fisher). I would have liked a better reunion between them all, in any of the movies, but that was not to be. You can’t have everything.

I like the new characters Rey (Daisy Ridley), Finn (John Boyega), and Poe (Oscar Isaac), so it was nice to see them again. The movie has many great aliens, bad guys, robots, and all the usual trappings that Star Wars movies generally have. Yes, (SPOILERS) Leia died, and so did Ben (Adam Driver), but their deaths have a whole lot more meaning than most previous Star Wars deaths. Kylo Ren/Ben was much more likable in this film than in any of the previous films. I actually felt sad when he died, which I didn’t expect. This movie has what the others lacked: hope.

Remember when you first saw Star Wars, and Han flew in at just the right time to save the day, and then Luke saved everyone? That's the feeling the other movies lacked. This one has “all the feels.” It makes you want to cheer. Even though this is the last movie in the final trilogy, and they tied up everything nicely, they do leave it open a bit for Finn, Rey, and Poe to return for more films. I'm sure I'm not the only one who would like to see that. In the meantime, we have the TV shows The Mandalorian, The Resistance, and the upcoming The Bad Batch to give us more Star Wars thrills.

The Blu-ray set has some good features. There's a feature-length documentary called "The Skywalker Legacy." It shows all of the characters, the actors, and many of the crew from the 3-part trilogy. It has many behind-the-scenes films and interviews from the past as well as the present. It's a nice tribute for the fans. There's another enjoyable feature about the speeder chase in the movie. There are quite a few other short features about how they created the aliens in the Pasaana desert scenes, one about the little droid D-0, one about Warwick Davis (Wicket) and his son, another one about the puppetry used for many of the characters, and one about John Williams, who created the music for all of the films, as well as played a bit part in this one. All of the extras are on their own separate disk, which is handy. If you're a fan of any of the Star Wars movies, it's worth buying this just to get that first documentary.
Twitter
BotonSocial por: SocialEmpresa
Category: DVD Reviews