Exclusive Video Interview: Hunters' Greg Austin on Playing the Dark Side of Travis

Friday, the second and final season of Hunters premiered on Prime Video. On the series, Greg Austin plays the villain Travis Leich. As part of the show, the character commits many heinous acts. The actor talked to SciFi Vision during a recent interview about connecting with and getting into the dark side of the character. One of the ways for him is music. “I've been listening to a lot of heavy metal, metal core, rhythmic technical guitars, screaming stuff over the pandemic, very angsty, clearly,” Austin told the site. “Going onto set, stepping from who I am as a person, putting the mask on and becoming Travis, that's a real good hook for me, finding something that embodies the emotion that evokes that in me, and that sort of music really does for me. It really gets me into the mindset I need for Travis.” 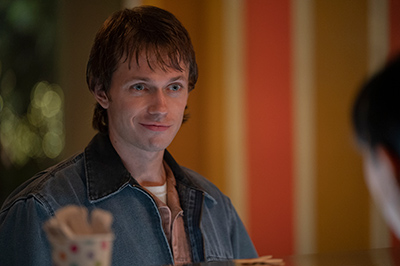 Austin likes that he is so different from Travis. “I don't often get to play characters that are so far away from me, but obviously, there's a common humanity that we all share,” he told the site. “…I guess what I can empathize with Travis is that he wants status, he wants to be seen, [and] he wants to be loved, even if that love I would consider a perverse kind of a shallow form of love. It's a psychopathic form of love. He wants security and comfort and status like we all do.”

During the interview, Austin also talked about his love of action scenes, what it was like filming a scene nude in front of costar Lena Olin, and how you can catch up with his character on the Doctor Who spinoff Class. Watch the full interview below, and be sure to watch season two of Hunters, now available to stream on Prime Video.