Irreverent premieres today on Peacock. The series follows a criminal mediator, Paulo, who on the run from the Chicago mob, assumes the identity of Reverend Mackenzie Boyd (Colin Donnell) and flees to the small Australian reef community of Clump in Far North Queensland, posing as clergy. Things there, however, are not what he expected when he finds himself in a small town with no phone or internet, and the townspeople are desperate for a leader. Can he keep up the illusion and settle into the new life? What starts off as an escape and pretending to care may just become a bit real for the criminal.

SciFi Vision recently spoke with members of the cast as well as the showrunner and executive producers about the new series.

The idea for the series came from showrunner Paddy Macrae, whose father is a church minister. “I grew up with my mom and my dad and my sisters and my brother in a very, very remote church, in a little house right next to a church, where the Minister is relied on for absolutely everything,” Macrae explained to SciFi Vision. “They're involved with the sports in the town, with every community event, every wedding, every funeral, every time there's a police matter…I thought [about how] I grew up in a small community. I love the sense of community and family around people. So, I wanted to make a show about community, and I thought, ‘What better place to put it than a small church?’…I didn't want to make a show about religion so much as about people and about connection.” 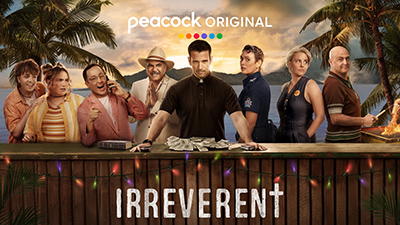 Macrae, of course, swapped out the reverend. “I thought, ‘[What] if we forced them into a role where their skill set as a criminal mediator was incredibly useful, but they had no theological training, no biblical knowledge whatsoever?’ It brings an enormous tension,” continued the showrunner. “It gives that character a secret, and we get to stress test the idea that if you are put into a role where you are forced to connect with people, and you are forced to care for people for selfish reasons, [it] may be those feelings and the human connections become just a little bit real.”

Executive producers Debbie Lee and Alastair McKinnon were sold right from the beginning. “It was just such a brilliant pitch, because it's such a truthful pitch,” Lee told the site.

“Paddy has absolutely delivered on what he promised at the beginning, so it was really exciting to see it come to life in that way,” added McKinnon.

Star Donnell connected with the story as well. “I think anytime you read a script,” he told the site, “You find something about a character that you can sort of grab on to and…even though Mack is so completely different from who I am, there was just something about it that I got, and I knew who he was. Maybe it was the fact that he is sort of playing a part in his own world and has to then expand it to his whole life really, when once he arrives in in Clump…There's something really joyful about taking a character that I think an audience maybe necessarily isn't supposed to like, and finding the bits of him that as they watch the show, they start to understand him a little bit more, and they start rooting for him.”

Becoming Mack changes Paulo, but the real Mackenzie (P.J. Byrne), who ends up taking over Paulo’s identity (and stealing from him), is changed by the experience as well. “He starts off the show with his wife leaving him, wanting a divorce,” said Byrne. “So, he has a crisis of love, and then a crisis of faith. He’s given all this money, and he's going to live a life he's never had a chance to, if you will, and he's childlike, so everything's like a big red balloon to him, but I think the deeper you get into this character, money and materialism is not the answer…Community is so important, and I think he's got to try to find his way back to that.”

The other main character in Irreverent is Piper (Kylie Bracknell), a cop who starts to question that Mack is actually who he says he is. “When [we] initially meet Piper,” she told the site, “…She's just hoping that this reverend is is going to adjust to the new climate that he's in. I think the outlook for this guy that Piper sees coming to town is that, ultimately, he's not going to rock the boat in the community of people that she loves and is connected to, and that, hopefully, that he can fit in at some point. But he's so quirky…He does not look like a reverend at all, and he certainly doesn't act like one.”

For more from the cast and crew, watch the full interviews below, and be sure to check out Irreverent, now available to stream on Peacock.