SciFi Vision recently got to sit down with Wyle and talk to him not only about directing again this season but about some of the difficulties in acting in the same episode you are directing. “What you shortchange yourself of is the prep on the episode, because you have to act in the episode that's just before it,” he told the site, “So, you get a little bit more efficient about how you prep, and you get a little bit more relaxed about what prep really is and isn't. I found that as I got more opportunities to direct the season, I was coming in with my plan, but looking at it a lot less and looking for things that weren't my plan a lot more, and finding that that was even more fun and exciting to know that I had a backup if I needed it, but be looking for the open door whenever a door would close as a new sort of way of testing myself.”

According to the actor, directing on Leverage: Redemption is not too dissimilar to The Librarians, which he also starred in and directed a handful of times. “Both shows are predicated on pace,” Wyle told SciFi Vision. “You have to keep the energy and the pace up, otherwise, you really lose the stakes of what you're going for, and you lose the audience's attention. So, either the actors need to be moving or the camera needs to be moving and there needs to be a real metronomic pace that's pretty quick.” 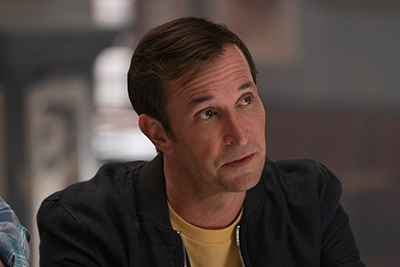 The actor went on to explain that you can get away a bit more with style on Leverage: Redemption. “You play with the toys of filmmaking a little bit more, because it lends itself with its slightly Ocean's 11 kind of slick, good transitions, you know, really hard cuts to move the action along.”

Wyle not only directed, but also wrote the fifth episode, which will air at the end of the month. “I wrote myself a really good part in the episode I wrote,” he teased. “I really wanted to see whether Harry could impersonate Eliot Stone (Christian Kane) for an entire act of the show.”

The actor may have a career with a lot of credits to his name, but there are still things he wants to do. “I still feel like the best is yet to come,” said Wyle. “…One of the great things about doing it for a while is you become somewhat analogous to a professional musician who goes to the orchestra pit, not worried about whether they can play the program, but about it's about how we want to play the program. It's about the interpretation of it and not so much the mechanics of it. It's lovely to get to a place where mechanics and technique are not the worry. The worry, if there is a worry, is in how to best execute the feel that we're going for, the tone, or something a little higher than that. So, that's what I'm excited about going for, the stuff I wasn't good enough to do before.”

For more from Wyle, including what it’s like directing your friends, working stunts with Kane, how working in New Orleans helps the experience of working on the series, and much more, watch the full interview below. The first three episodes of Leverage: Redemption are now available to stream for free on Amazon Freevee.