Tonight, NBC premiered the midseason finale of La Brea. At the end of the episode, when Gavin (Eoin Macken) prepares to jump back into the sinkhole to 10,000 BC with his family in the hopes of helping his mother (Melissa Neal), Caroline, stop what’s been happening for good, he starts to have a vision. In his vision, he sees his wife (Natalie Zea), Eve, dying. When Gavin had visions before, they were of his past as Isiah, but this time seems different. Last week, SciFi Vision spoke with showrunner David Appelbaum about the fall finale and asked about the visions. “This vision of Eve dying and her death is something that's going to drive our story in a big way in the back half of the season, knowing that might be around the corner at any time,” Appelbaum told the site. “It's really going to up the stakes for all of our characters needing to protect Eve, but also, increase the stakes of wanting to get her out of there into a safer place.”

The showrunner went on to say that the show would delve into the mythology behind it, but more importantly how it affects the family emotionally now that they’ve been reunited. “Now, in 10,000 BC, in the back half of the season, how they stay together emotionally is going to be another complicating factor, and the specter of Eve's death is something that's going to be at the center of that,” said Appelbaum. 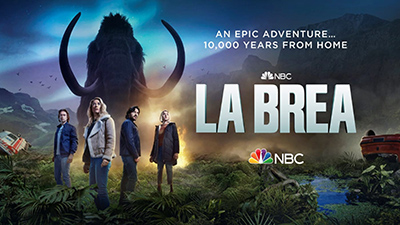 Why did Gavin choose to hide the vision now that his family knows they are real? “I think it was a few things that were happening,” he explained, “one, him knowing that he had to go back now in order to help Caroline upload the virus to shut down the portal…Two, I think it’s shock. It’s hard to process that idea right away, and he wasn't sure what to say. I think maybe if it had happened at any other moment, he might have thought about it more and explained it, but it's a hard thing to tell your wife or your kids, [that] you just had a vision of their potential death. So, it was just a lot for him to handle. He didn't quite know how to deal with it.”

For now, the family is back together, and Levi (Nicholas Gonzalez) staying behind in 1988 might give Eve the opportunity to reconnect with Gavin. “I think that's that'll be one of the main stories in the back half of the season, is now that they're together, can their relationship be healed? And it's not going to be such a simple thing,” Appelbaum teased. “They do love each other, but there are a lot of complications in the relationship, and one of the things that's going to be at the center of it is James, Gavin's father (Jonno Roberts)…[He] potentially holds the key to them getting home eventually, because he controls this building, which has this portal, but at the same time, he's someone we're not sure if we can trust. I think Gavin wants to be able to trust his father, but Eve is going to feel very differently about him because of everything she’s learned about who he is and what he's done. So, that is going to be at the center of something that might divide Gavin and Eve.”

For more about what else is in store in the back half of the season, how the story deviated from their initial plan, and more, watch the full interview below. New episodes air on NBC in January.