Recently, the series Manifest came to Netflix for the first half of the fourth and and final season. The series follows passengers of Flight 828 who returned home from their flight, only to find five years had passed in their absence.

At the end of last season, after the tail fin of the plane had been returned to the ocean, Cal Stone, who previously disappeared when touching it, returned having suddenly aged five years.

Ty Doran, who plays the older version of Cal, did take into account how actor Jack Messina previously played Cal when he took on the role. “I thought a lot about that,” the actor told SciFi Vision during a recent interview. “I mean, the writers helped me out a lot in the dialogue this season. It gave me a lot to hold on to…I am very in awe of his work and tried to steal as much as I could to make that transition as seamless as possible. Everybody on set, on the creative team, and in the crew, everybody was super helpful in figuring out like…this is how he said this line before. Like, ‘it's all connected’ is a favorite phrase of Cal’s. We say it a few times and just getting the cadence and paying homage to what comes before, it's very important in telling sort of a seamless story and keeping that mythology of the show intact.” 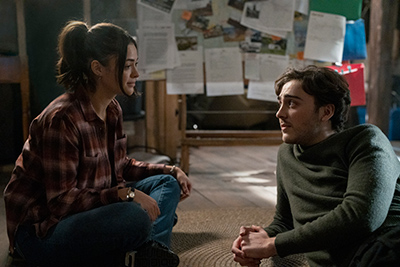 Cal’s twin sister, Olive (Luna Blaise), may not get callings, or visions of the future, like her brother, but she’s still involved in solving the mysteries of the 828ers. “I mean, there’re a lot of those suspenseful Olive Stone realization moments of things that are about to happen,” the actress told the site. “There's a lot of that this season, for sure, a lot of deep dives and just trying to solve this mystery…It's always fun, because Olive doesn't get the callings, but she's like, ‘I've all the brains, so I'm going to figure out why you're getting these callings.’ So, it's always fun figuring out little things like that.”

For more from the two, be sure to watch the full interview below, but beware, there are some slight spoilers for episode ten. The first half of season four is now available to stream on Netflix.