After over two years of waiting by fans, today marks the anticipated return of Warrior Nun to Netflix. SciFi Vision spoke with showrunner Simon Barry earlier in the week about what fans can expect.

Season one of Warrior Nun revolved around trying to free Adriel (William Miller). They’ve now discovered that Adriel was not an angel as they had believed, and this season focuses on Ava (Alba Baptista) and the other nuns of the Order of the Cruciform Sword defeating him. “We really wanted to have Ava be given an adversary that was worthy of her and worthy of the situation that she finds herself in and is embracing as a character,” Barry told SciFi Vision, “because Ava in season one kind of got over this situation she found herself accidentally in and decided that this was a life of purpose and a life that would have meaning. She found love and companionship with her sisters, and so now she has someone to fight for. It wasn't just about her anymore and being selfish. It was about her being selfless. So, we needed season two to really be the expression of that, and in doing so, we needed to give her something that she could conceivably give everything up for if she had to, because that's ultimately what the hero does.” 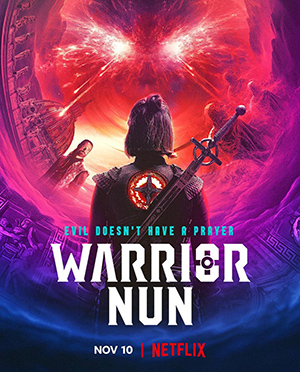 What makes Warrior Nun unique is it builds on these religious ideas but balances it so beautifully with science fiction. “We always loved the idea that building on Catholicism and Christianity was so easy for the audience to digest, the stakes of good and evil, Heaven and Hell, God and the devil, and angels and demons,” Barry told the site. “This is a very familiar language, and it's not religious. The show's not a religious show; it uses religious mythology as a template for stakes, and those stakes are universal death, the afterlife, good and bad, and that has nothing to do with Christianity, it's just got to do with a religious structure. So, for us, it was fun to take that great rich mythology and tweak it with our sci-fi mythology and see if there was a way to overlap or misinterpret old mythology into new mythology.

“…So, we thought, as writers, wouldn’t it be great to kind of use the basis of religion as a way to not change the stakes, but to change just a little bit of the information and see if there were some myths or misinterpretation…It was just fun to take all that imagery and spin it.”

During the interview, Barry revealed that their plan with where to take the series has evolved over time. “In season one we had a loose plan, but that changed as we wrote season one and became more familiar with the characters more familiar with the mythology,” he explained. “So, by the end of season one, when we were discussing season two, theoretically, we had charted a new course for season two than we had intended necessarily at the beginning of season one. And in saying that, we did the same thing in season two. When we were writing season two, the goalpost of the ending of season two had to be in context of what we thought a season three would be. So, we discussed early on about what a season three might look like, and that was very different from what I thought season three would look like from the beginning for season one. It's a constantly evolving process, and I'm grateful that it's not just up to me. I get to have really robust, thoughtful conversations with the writers about what we would all love to see, as not just the people writing show, but as fans as well, and make sure that it's as watertight as possible, so that it doesn't let down the show and that it feels like we have an agenda that is about something [and] not just randomly throwing together crisis after crisis after crisis.”

Unfortunately, there has been no news yet on season three, but fans remain hopeful. In the meantime, season one of Warrior Nun is available to rewatch in preparation for the new season, which is now available to stream starting today on Netflix.

Watch the full interview with Simon Barry below!