SciFi Vision | Interviews | Exclusive Video Interviews: Creator & Cast on the Return of One of Us is Lying, Now Streaming on Peacock

Exclusive Video Interviews: Creator & Cast on the Return of One of Us is Lying, Now Streaming on Peacock

Today, Peacock released the second season of the series One of Us is Lying, based on the book by Karen M. McManus. In season one, a student, Simon (Mark McKenna), was killed during detention, and four students spent the season trying to find out what really happened and prove their innocence, culminating in another student’s death. Although season two is not about figuring out the killer, that doesn’t mean that it isn’t just as thrilling. “Season two is about a killing that they did commit,” explained creator and executive producer Erica Saleh in a recent interview with SciFi Vision. “So, it's a little darker. It's a little twistier. They're trying to cover that up, and they find out at the end of season one that someone knows what they did…The mystery is who knows and how far is this person going to push them, and how far will they go to cover up what they did?”

SciFi Vision also spoke with the stars of the series about their respective roles.

At the end of season one, the students decided that to help hide their secret they couldn’t be seen hanging out together, which in season two is tough for Nate (Cooper van Grootel) and Bronwyn (Marianly Tejada) who developed feelings for each other. The two spoke to the trajectory of their relationship in season two. 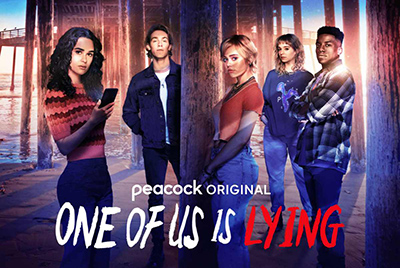 “I think the dynamic is very exciting,” van Grootel told the site. “I think the writers do such a great job of pushing them together, and then kind of pulling them apart. It's kind of this ebb and flow, and they can't really resist one another.”

“Whenever Bronwyn and Nate are physically close to each other, there's going to be tension,” added Tejada.

Having completed a season, the performers felt more comfortable stepping into their roles again in season two. “I think season one was just more prep and understanding of tone, what the expectations are, just familiarity on set,” explained Chibuikem Uche, who plays Cooper. “That just all allowed me to step into season two and feel fully prepared.”

“For me, this season was obviously much different in terms of how much I'm in the show and what I'm doing in the show,” said Jess McLeod, who plays Janae and has an expanded role this season. “…There's so much to shoot, and I think I learned a lot about from [the other cast members] actually about managing your energy and how kind of in it you have to be and then how to let it go and how to still have fun on those days.”

Annalisa Cochrane, who plays Addy, agreed that what she learned about managing the work and letting go was important and knowing when you can joke around between scenes. “It was really like season one was training for season two; it’s acting school,” said the actress.

For more from the talent and creator, watch the full interviews below, and check out season two, now available to stream on Peacock.