Anne Rice’s Interview with the Vampire, which recently premiered on AMC and AMC+, is a contemporary reimagining of the gothic novel that tells the tragic love story between vampire Lestat de Lioncourt (Sam Reid) when he falls for and turns Louis de Pointe du Lac (Jacob Anderson). What follows is an epic and bloody tale that includes the turning of now forever fourteen-year-old Claudia (Bailey Bass), all told via flashbacks to journalist Daniel Molloy (Eric Bogosian).

In tonight’s all-new episode of the series, Louis goes to visit his human sister, played by Kalyne Coleman, even though he wasn’t invited to her twins’ birthday party. Having not visited for six months, his mother tells him he isn’t welcome, and Grace’s husband, Levi (Christian Robinson), attempts to make him leave. Angered, Louis kicks the door open, and it flies off the hinges, leaving everyone terrified.

Is that the last straw for Grace? According to Coleman, who recently spoke with SciFi Vision, what happens in episode three is a “big transition” for Grace. “I think that Grace now understands that the changes that are happening with Louis are becoming violent, are becoming unsafe for her family in a way that she can't be okay with anymore,” the actress told the site. “She's tried to keep the connection. She's tried to show him that there's still space here. And there's so much that you don't see as far as the many attempts she's made toward Louis to reach out and tell him, ‘Please, trust me. What's going on? I'm your sister. Be here for my family. I want to be there for you.’ So, I think in that episode is when she realizes there has to be a line drawn. She has to protect herself and her family, because something darker is now happening.”

During the interview, the actress not only spoke to the practical effects of the scene in tonight’s episode, but also, her adjustment moving from theater into her first television role, where she pulled inspiration for Grace, wearing such elaborate costumes, and much more. Read the full transcript below and watch new episodes Sundays on AMC or stream them a week early on AMC+.


SCIFI VISION:  It seems like this is your first big role, at least according to IMDb. I know it's not always accurate, but is that the case? How did this happen? I mean, that's quite a big deal to get a pretty big show right out of the gate. 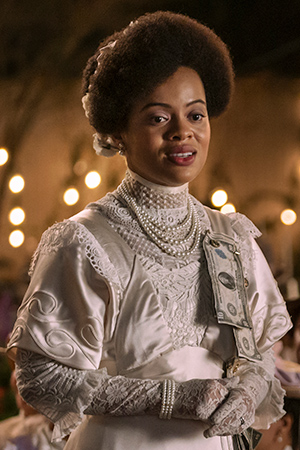 KALYNE COLEMAN:   So, I should say, I have done a bunch of theater. I graduated from my Master of Fine Arts program in 2020. So, this is my first TV show. That is true; that is true, and it is a huge one to get. So, how it came about was, it was on a weekend where I had like four or five or six, somewhere near that, auditions to do by Monday. And let's be clear, there was a time where I couldn't even get an audition, so I was very grateful for that weekend, but I was also overwhelmed. I was like, “How am I going to get it done?” The email came in on a Saturday, and it's Interview with the Vampire. I started reading the breakdown, the description of the character. I said, “Oh, this is really good.” Then, I opened the script. I read it from top to bottom and did not put it down. I was like, “This is for me; I must do this.” So, I actually called my friend, and I put it on tape the same night and pushed back all the other auditions, because I was so excited about what Rolin [Jones] had created via Anne Rice, and I was so excited about this world and Grace as a character.

Now that you're doing television, what has been the biggest adjustment for you coming onto this huge show, having not done that before?

I think there is a release of control that you have to have. When you come on to a set in theater, you have six weeks to get to know the character, the story. You're talking to the other actors. You're talking to the director; you're finding each moment. On set, you might have a table read, but you show up, and you might get a five-minute rehearsal, and you're doing the scene. So, it's like there's a way in which you have to trust yourself and the people around you and surrender and be as truthful as you can, and do the best you can, and trust that the editors, the directors, everyone has the story’s back, and they do whatever they need to make the story come alive for viewers. So, I think that was the biggest differences, the time and release of control.

You probably were familiar with the books, but had you read them before getting the part?

I had not, and I took a deep dive after. I listened to the book, sixteen hours on tape, and took many, many notes. I started looking at all these documentaries and interviews of Anne Rice, about her life about her writing style, and I just fell in love with the characters she creates and the questions she asks and the souls of the supernatural people she offers to the world. So, her imagination is just so big, and I'm grateful to be carrying on her legacy in this way.

Now, I admit, I have not read the book. So, I don't know if your characters in the book or not, but I was going to ask, other than if she's in the book, and the script, where else did you pull inspiration as you were creating her?

She is in the book. Her name is not Grace. I don't think she's named. She is Louis’ sister in the in the book. So, there is a journey between Louis and her definitely inside of it, but I pulled inspiration from many places. It was really important for me to honor free people of color and Creole folks and New Orleans in the 1900s. So, I definitely watched documentaries about Storyville. I went and visited the Free People of Color Museum in New Orleans. I thought about my aunties and grandmothers and what a woman in that time might feel like, her essence. I watched a lot of period peace dramas and borrowed from different actor interpretations of things. And I think one of the most beautiful and hard things that I've found is there's not many stories that talk about this time, this history, this culture, so a lot of it too was my imagination and working with the dialect coach and all the people who are part of the story, the costumes, everyone, the person who does hair, Andrea [Young], everyone, to create the character.

I was going to say, and you get more than one too, but you get to wear quite elaborate costumes which must really help with that…You're lucky; you get quite a few really pretty ones too.

I know! Carol [Cutshall] did her thing! She really did her thing, like the wedding. And over the course of the series, Grace goes from about 22 to 45. So, she really gets to experience the 1910s, 1920s, 1930s, and the different style changes that happen, and because a human's life goes so quickly in a vampire’s memory, you're always seeing Grace in different outfits, which was incredible for me, and also a learning curve to figure out how to move in these period pieces, especially the first ones that were the more tight and sort of like structured.

Well, they look pretty, even if they don't feel pretty. [laughs] 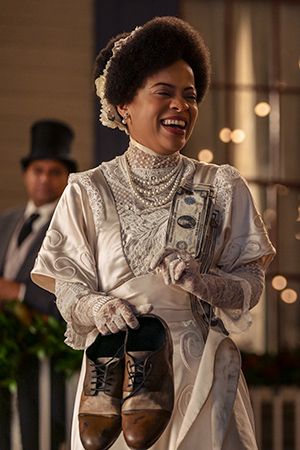 Thank you. Thank you. I appreciate that, because there was one time I had to reach out, and I was tripping all over the place, because I was like, “Oh, you have to lift up your skirt?” [laughs]

You know what? You're so right. Thank you for bringing it back. First of all, I love the wedding scene, especially when I'm doing this speech, because it felt the most like theater. That tap dancing scene felt ancestral. It was so beautiful to watch Paul (Steven G. Norfleet) and Louis do their thing. They had dancers ready to go if they weren't able to do it, and they killed it. They killed it, and the crowd reactions were so real, because every time they were putting all of the energy to it, and I really felt like I was it was my wedding day, and my brothers were dancing for me. I think it's such a special moment, especially with Paul and Louis, because it's like a burst of joy before some trauma happens. So, it was just a beautiful moment of love. That was one of my favorite moments on set.

Now, let's talk specifically about about [tonight’s] episode. In this one, Louis blows the door off and scares the crap out of you and your family. I assume that was at least partially a practical effect with the door. How was that done?

The movie magic, right? So, shout out to Keith [Powell], who directed this episode. He's so incredible. Basically, what it turned out to be is not [laughs] what happened. What happened was, basically, the crew did it in such a way where they had a couple of folks push a door that was already laying down towards us, so we had something to react to, me and the girls. To see what they created is just magical. I was like, “Wow, you can do anything in the moving magic world.”

Also, when I wasn't on set, they had this [thing], I think everything was attached to it, and please forgive me if I'm saying this wrong, but this is what it looked like, attached to strings, and so they recorded everything collapsing, like someone would pull it all, and it would just collapse down. So, that was also a part of it, when I wasn't actually in the scene.

I think that there's a big transition that happens in three. I think that Grace now understands that the changes that are happening with Louis are becoming violent, are becoming unsafe for her family in a way that she can't be okay with anymore. She's tried to keep the connection. She's tried to show him that there's still space here. And there's so much that you don't see as far as the many attempts she's made toward Louis to reach out and tell him, “Please, trust me. What's going on? I'm your sister. Be here for my family. I want to be there for you.” So, I think in that episode is when she realizes there has to be a line drawn. She has to protect herself and her family, because something darker is now happening.
Twitter
BotonSocial por: SocialEmpresa
Category: Interviews