SciFi Vision | Interviews | Interview: Cast and Creatives on Showtime's Let the Right One In, Premiering Sunday

Interview: Cast and Creatives on Showtime's Let the Right One In, Premiering Sunday

Let the Right One, which premieres Sunday on Showtime, follows Eleanor Kane (Madison Taylor Baez), who ten years prior was turned into a vampire and thus stuck forever as a twelve-year-old, only able to leave at night. Her father, Mark (Demián Bichir) does his best to continue to provide her with the blood she needs, but things become more challenging when they become entangled in the lives of those around them, including Isiah Cole (Ian Foreman) who wants to be friends with Eleanor.

The ten-episode series was inspired by the original Swedish novel and film of the same name. When adapting the story for the new series, showrunner and executive producer Andrew Hinderaker started with the connections between the characters. “The [original] movie is not only one of, for me, the best horror movies ever made, but probably the most moving, and that's how I always begin, with an emotional connection,” he told SciFi Vision during a recent TCA panel. “I think that, in the film, the relationship between those two children…is just astonishingly beautiful and poignant and poetic, and so there's an opportunity to use that as an aesthetic inspiration.”

“What's sort of extraordinary about the film is it also felt like there was real creative space to build upon what was already there,” he added. “So, for example, there's sort of a small relationship between the character, the child vampire, and her caretaker, who fetches her blood. For me, personally, as a person, as an artist, I was really interested in exploring addiction and exploring what a parent will do for a child when they are struggling with addiction. It felt like this incredible gift to take what was in the foundations and in the sort of seeds of the film and create an entirely new story that would be centered around Demián's character Mark and Madison's character Eleanor and explore the lengths that this father would go to keep his daughter alive.” 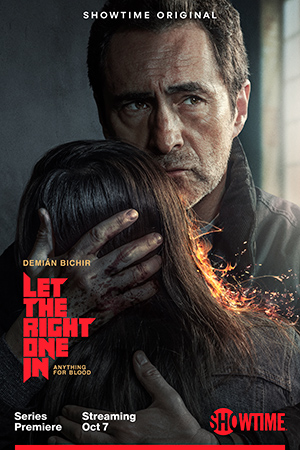 The showrunner also said that the series has the addition of new characters, Isaiah and his mother, Naomi (Anika Noni Rose), as well as a family that “supports a vampire,” led by Grace (Claire Logan).

“It's a new story that really is at the same time very much a love letter to the film,” said Hinderaker.

Director and executive producer Seth Mann said that he was a little bit skeptical at first but was “blown away” by the new relationship Hinderaker wrote between Mark and Eleanor. “What was so beautiful and brilliant about it was he took this beloved movie and found room to create a whole new dynamic,” he told the site, saying he was “hit in a personal and emotional way” by the exploration of how far people would go for their children.

“Seeing it with Demián's character, Madison's character, [and] seeing it with Grace's character's relationship with her brother and their father, and seeing all of these people transformed into behavior that would, on the surface, be described as monstrous, but understanding where it was coming from, understanding their motivations, really being able to connect to the humanity and some of the evil things that people do, was really sort of profound for me. Then having the foil of Anika's character, Naomi, who was dealing with a regular child with regular child problems and seeing that the stakes for each of them is tied to each other…It was really beautiful and something I was so excited to work with Andrew and this amazing cast to build.”

The series comes at a time when there are already multiple shows about vampires either on air or premiering. Why do people find vampires so appealing? “For me it's that they are the most human of monsters, I think,” Hinderaker told the press. “They look like us. They talk like us. They attack in the most intimate of ways…That, to me, makes them feel dangerously close, and there's something really exciting and thrilling…[O]ur vampires and the people who love them are deeply human…I would say that's the appeal and makes it even more terrifying because of that.”

Star Bichir was already a big fan of the original film when he joined. “I was very curious to see what Andrew has done to transform two beautiful hours into ten, and I was just amazed at how he kept adding beautiful layers and different characters,” he told the press.

Baez was similarly impressed. “I really fell in love with this role as soon as I got it,” said the actress, adding that there were a lot of difficult scenes and late-night shooting, but it was “definitely worth it.”

For more, be sure to watch the new series, which premieres Sunday on Showtime, or stream it now on the app.
Twitter
BotonSocial por: SocialEmpresa
Category: Interviews