Today Peacock releases the limited series, Last Light, based on the bestselling novel by Alex Scarrow. Last Light tells the thrilling story of the chaos that is a result of the world’s oil supply becoming unusable, and the family separated by the crisis.

Amber Rose Revah plays the part of Mika Bakhash, a woman with connections in the British government, who partners with Andy Yeats (Matthew Fox), the world’s leading petro-chemical engineer. 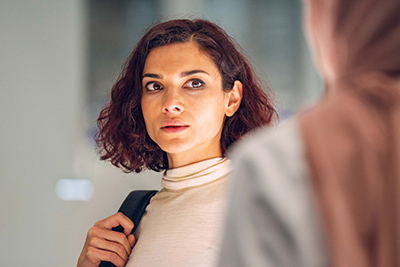 During a recent exclusive interview with SciFi Vision, Revah likened Mika to James Bond in some ways. “There's not much she gives away and I quite like that,” said the actress. “You’re intrigued when you see her, and you kind of think, ‘Well, I don't know that much about her background,’ and I feel like that kind of level of intrigue just felt a bit Bond-like, really.”

As such, the actress got to do some stunts for a fight scene in the series “We got to do some BJJ, Brazilian Jujitsu…and then we incorporated elements of Krav Maga, and boxing,” explained Revah. “It was great, because it was learning different disciplines and then putting them together in a way that created the fight. I think because Mika would have had that background of having all of these disciplines, being trained in them, it feels quite real, quite authentic to the character.”

Revah also touched on working with Fox on the series, who she had nothing but positive things to say. “The Mika-Andy story, from the beginning to what it eventually came to, was quite a journey,” the actress told the site. “I think part of that was because Matthew is so dedicated, and he really wanted to workshop that story element, to make sure that it was honest, that it was truthful. It's such an interesting dynamic with both of them, because they both have power in different ways. It's a platonic relationship, but they're both always second guessing each other and reading each other…So, it was great, because he's so committed to the work, and when you're playing it, you kind of can bounce off that.”

For more, including what it was like working with Fox in the desert, watch the full interview below, and be sure to check out Last Light, now available to stream on Peacock.