TNT’s hit show Animal Kingdom ends its six-season run when the series finale airs tonight. Fans are on edge waiting to see what happens with the criminal Cody family. Each of the boys has an endgame in mind, but J is almost certainly planning to double-cross his uncles. There are also unanswered questions in the flashbacks. Are there more secrets surrounding J’s birth and Julia’s death?

SciFi VIsion caught up with series costars Kevin Csolak (Boardwalk Empire) and Jasper Polish (Force of Nature), who play young Pope and Julia. They wrapped their roles in 2021 and have waited almost a year for the finale – neither has seen the completed episode yet.  “It's just been an insane whirlwind,” Polish told us, “but I'm very happy with how both of our characters have been accepted again into the fan base.”

Neither Csolak nor Polish would give details, but they did tease a satisfying conclusion. “The last episode is really, I think, going to give people the energy and propel them to go back into season one. There're a lot of exciting things and questions that are going to be answered,” teased Csolak. “It's going to make me want to go back and start Animal Kingdom from season one again and just rewatch and see how it all connects.” 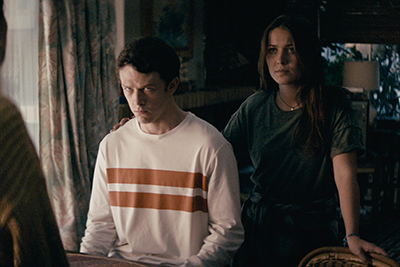 “It's pretty full circle,” Polish agreed. “They've written it very well, and there's a lot that's going to happen. We can't really say anything else besides that, but there’s just going to be a lot going on.”

Asked to describe their characters’ final episode, Jasper chose one word: rough. “At least for my storyline, it's a little rough. I'm just going to leave it at that...We all know what happens with Julia, and I think what's so heartbreaking about it is you see this girl, this young girl, who just wants to help her family and wants to help her brother, and the world is against her. It's very sad to watch, and we all know how her story ends, and it just continues to just be a little bit heartbreaking.”

“I feel like this can go both ways,” said Csolak, “but I'll give you three words. I would say for Pope it’s ‘dedication to family.’ In his own way, you really see that deep dedication come out.”