Syfy recently premiered the back half of the second season of its series Resident Alien. This season on the series, D’arcy (Alice Wetterlund) had been talking to Ben (Levi Fiehler) without Kate (Meredith Garretson)’s knowledge about some of the things that were bothering him about his wife and his marriage. When Kate found out, she understandably became upset. When we spoke with Wetterlund and Fiehler recently during a roundtable, we asked if their friendship could continue to survive in spite of what has happened.

“I mean, Kate's alone in this,” Wetterlund told SciFi Vision. “She's fighting for her marriage; she's fighting for her kid. She's fighting for any semblance of a frickin’ social life. So, D’arcy really effs her over when she finds out that her new best friend is actually just kind of going behind her back and talking to her husband about her. It doesn't feel great, and I completely understand why she would feel that way. It's super inconsiderate. But from D’arcy's point of view, she doesn't really understand the connection between Ben and Kate that much, because she doesn't know Kate. It's like kind of thing when your childhood friend gets married, and you don't really get it…So, until she really invests and begins to understand who Kate is, she's not going to be able to sympathize with Kate.” 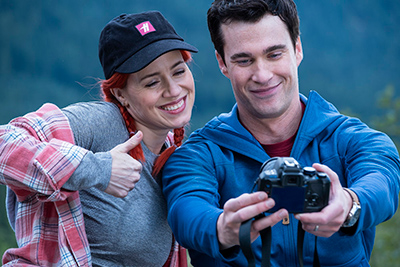 “It's messy, but I think there's a certain point at which D’arcy and Ben's friendship gets tested by something else in this in this second half of the season that's an outside force we'll say,” the actress teased.

Will Ben still confide in D’arcy? “Yeah, I think so,” Fiehler told the site. “I think they've been through so much just having grown up together and having dated and kind of been each other's first, it sounds like, serious relationship. I think she'll always be in his close circle of friends…These characters, even though they have their adult pants on now, they still know each other as kids, and they know all each other's like shortcomings and insecurities and stuff like that. So, I think, yeah, it's just part of the friendship. I think that sometimes things boil over and get messy and fall apart.”

For more, watch our portion of the interview below, and catch Resident Alien¸ Wednesdays on Syfy.