Five Days at Memorial continues this week as the fifth episode drops on Apple TV+’s. The riveting eight-part miniseries tells the real-life story of the staff and patients trapped inside New Orleans’ Memorial Hospital in the aftermath of hurricane Katrina.  The fifth episode, “Day Five,” is out today and is the most harrowing hour of an unrelentingly grim series, but it’s truly an excellent hour of television.

In Day Four, the medical staff was beginning to face some very difficult decisions about who to evacuate first – decisions that could mean life or death for the last in line, but the evacuation didn’t happen and people inside and outside the hospital are growing desperate. Patients are beginning to die while exhausted doctors and nurses stand by, unable to offer treatment or relieve their pain. Day Five brings unthinkable questions and impossible choices that ultimately lead to a criminal investigation.

Recently, SciFi Vision spoke with Adepero Oduye, who stars as Karen Wynn, nurse manager of the ICU and also head of Memorial’s ethics committee. Oduye credits the source material (journalist Sheri Fink’s book of the same name) with helping her understand Wynn’s real-life experience. “The book was really helpful in unpacking the ethics of it all,” she told us, “and the ethics committee and what it historically does, particularly in this hospital.” 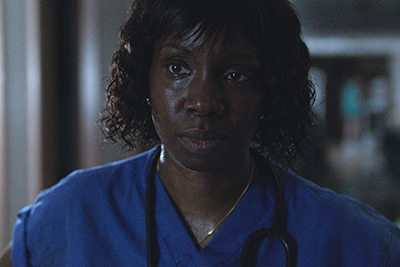 “It is one thing,” Oduye explained, “to be the head of ethics, to talk about things ethically, which you're basically talking about in theory, in preparation, but when real life happens and happens fast, and in quick succession? You can talk about theory, but it's not the same thing as real life. Then, you're really having to make decisions on the fly, for scenarios that you didn't know to even prepare for. You're having to take care of things the best way that you can with what you have, on top of being exhausted and being hot, not being around family, and not be able to contact your family, and you're having to take care of your staff and your patients. So, there's a lot that could muddle the work around ethics.”

We also talked about her sense of responsibility she felt for her character. “[I wanted] to bring all of myself to the story; there's no room to lay back and check out and be overwhelmed by what we're having to portray and depict. We have a job to do just like those doctors and those nurses and those staff had a job to do. So, I owe it to the story and to the people on which the story is based to bring all of myself in.

"I think that was definitely reflected in my cast mates, but also in the care that John [Ridley] and Carlton [Cuse] brought to the story, how they expressed that care, how they really set the tone in terms of, ‘We are all here together. Everyone is to be respected and the story is to be respected,’ and that was felt in every aspect of the storytelling.”

Watch the full interview below, and don’t miss the rest of the series. Five Days at Memorial streams Fridays on Apple TV+.