Tonight, an all-new episode of Resident Alien premieres on Syfy. This season, with the introduction of Detective Lena Torres (Nicola Correia-Damude), Deputy Liv Baker (Elizabeth Bowen) is getting ignored even more by the sheriff (Corey Reynolds). When SciFi Vision recently spoke with Bowen, she said that her character was starting to gain ground with the sheriff, but it comes in fits and starts. In our most recent interview with the actress, we asked her if it is a matter of confidence with Liv.

“She may have some insecurities around not being listened to by people,” explained Bowen to SciFi Vision, “But I do believe she very much has the courage of her convictions. She's very confident in her ability to parse information, I think, and puts everything in the right box. So, I would say the confidence issue is more in just having to maybe speak up on how she feels, even though you don't want to bring too much emotion into your job. She has to sort of have the confidence in the fact that eventually people will listen.”

That being said, Liv moves ahead with investigating without the sheriff in tonight’s episode. “She's quite sure that some of her suppositions, some of her theories, have legs. So, she does decide to go up with Asta (Sara Tomko) and basically confirm what she's pretty sure she already knows to be fact,” teased the actress. 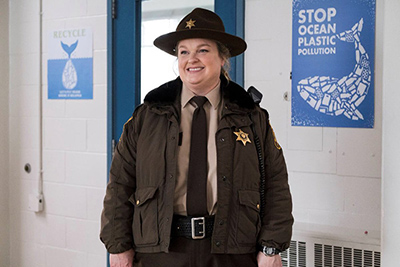 As Liv and Asta do seem to be fairly close, we asked Bowen why she feels that Liv doesn’t confide in her about her UFO theories. “I don't think she's wanted to share that side of things with her friends, because it is very personal to her, and she feels very vulnerable and exposed at the thought that people would write her off as being crazy, that people might not listen to anything else she has to say from now on, because they're judging her, because they're thinking aliens aren't real. I do think that's the big part of it. It's a small town, and I think, especially in a small town, once you get labeled as something, it's very hard to ever sort of overcome that.”

The actress did reveal that Liv would eventually meet the alien hunter (Terry O’Quinn) whom she’s been trying to contact.

Believing in aliens, fans have obviously been hoping Liv would find out the truth about Harry (Alan Tudyk). How does Bowen think she would react to the news? “I think she'd be very interested,” she told the site. “I think a lot of things would fall into place. All these little pieces that [she’s] just sort of writing off as ‘this guy is just a little bit different,’ I think would all of a sudden start to make a lot more sense. So, I don't picture that she would be scared or angry; I think she'd be fascinated. I think she'd want to like pick his brain, if he would let her.”

For more, including if the actress feels she herself would make a good investigator, using her improvisation skills in the series, and more, watch the full interview below and don’t forget to watch Resident Alien, tonight on Syfy.