Looking for something to stream this weekend? Do not miss Five Days at Memorial, which premieres today on Apple TV+. Based on actual events chronicled by Pulitzer Prize-winning journalist Sheri Fink, the new limited series dramatizes the impact of Hurricane Katrina on a New Orleans hospital and the harrowing aftermath. The early episodes play like a disaster film as the staff and patients hunkered down to ride out the storm. When the levees broke, Memorial Hospital was surrounded by water with no power, water or evacuation plan. Facing horrific conditions and with no good options, exhausted doctors and nurses made impossible decisions about how to care for and comfort their patients. When it was all over, 45 bodies were recovered from the hospital, triggering a criminal investigation. Ultimately, Five Days at Memorial offers a compelling ethical discussion and powerful indictment of the corporate and government institutions that failed New Orleans. 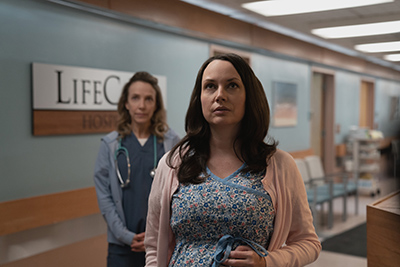 Recently, SciFi Vision spoke with Emery about her powerful performance as nurse Diane Robichaux, who worked at a long-term care facility that rented space within the hospital.

“This show feels like [an] epic disaster movie with intense depth,” Emery began, “and then we cut to the stock footage and all of this news footage, and you're like, ‘Oh, right. This really happened. This is based on actual events.’  It's such a stark reminder that this actually happened…There's a very human cost. We're a dramatization of Sheri Fink’s excellent book, and I think that's something a dramatization does really well that a documentary maybe can’t; it really can take you inside the psychological and emotional aspects in a very human way that I hope has impact for our audience.”

As the situation inside the hospital grew desperate, Robichaux realized that she and her patients were not a priority for Memorial and its parent company. Emery’s scenes as Diane are some of the series’ most heartbreaking – and the most infuriating.

“I think Diane, my character, is operating on a level assuming that we all are working on the same moral compass” she said. “It's a disaster; we all pull together. Of course you get the sickest patients out first; they rely on ventilators, things that require electricity. Her arc is really kind of systematically watching her lose faith in humanity. You really see her assume that they’ll be informed, discover they're not informed, and…continue to fight and fight and fight for her patients.” Emery pointed to a shattering scene “where Diane realizes what's going on, and it really has not occurred to her yet. I think that's the moment we see her just break on the inside completely. There's something is just broken there that I don't know if you fully get back.”

Over the eight episodes (five days in the hospital plus three episodes covering the legal and emotional aftermath), the series asks viewers to consider how the doctors and nurses found themselves unable to save 45 patients. “There's a larger discussion to be had here,” Emery believes, “about the fact that it never should have come down to that. These people were abandoned on every level of institution and government that was supposed to show up from for them – from their own corporations to the institutions to the local, state, and federal government. It felt like no one wanted to take responsibility for the mess, and so no one stepped in.

“And if you're going to place responsibility on something or someone,” she added, “I would love to see us place the responsibility there, because that's an area where we can really make a difference in in the upcoming collective crises that we face.”

Emery closed with a story: “At our very first cast meeting, John Ridley gave us a variation of a Mark Twain quote: ‘History doesn't repeat itself, but it does rhyme.’ And boy, 17 years since Katrina, have we seen this rhyme over and over again, and frankly, we're not getting that much better at it. So, I really do hope the show is a call to action and a conversation starter in a bigger societal way. Like, who do we want to be in these moments? What do we want to do? Who do we want to be for each other?”

During our fifteen minutes together, Emery spoke in greater detail about the true story and the physical experience of shooting the harrowing story. Watch the interview below.