There television series Moonhaven takes place in the future and follows cargo pilot and smuggler Bella Sway (Emma McDonald) after she is stranded on the moon after being accused of murder. She, along with the help of Detective Paul Sarno (Dominic Monaghan) and his partner Arlo Noon (Kadeem Hardison), must not only clear her name, but also help stop a conspiracy surrounding the artificial intelligence IO, tech that is supposed be used to save her home planet of Earth.

Ayelet Zurer plays the role of Maite Voss, the political leader in the seemingly utopian Moonhaven. “She is a very unique character, because she's built from opposites,” said the actress about Maite during a recent interview with SciFi Vision. “She's wise, but she's naive. She's meticulous, but she's also intuitive, and she goes with her emotions and her instincts. She's spiritual, but she's grounded.” 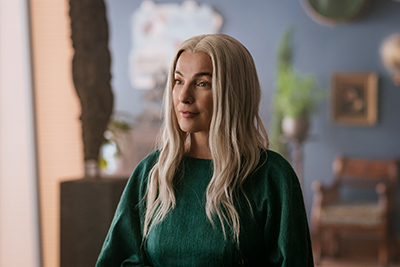 The actress loved everything about the role from the beginning. “The writing was so great,” said Zurer. “It was thrilling, and at the same time, actually deep, and it had humor in it, but it was also like a sci-fi action thriller, but it [also had]…family drama. So, it was really encompassing [for] many, many aspects of everything that I love.”

Working on a series that takes place far in the future meant working with green screen, but there were also a lot of beautiful real sets where they filmed in Ireland, according to the actress. “I was told that Maite lives on the edge of the waterfall…When I learned that the waterfall actually exists, and they were shooting it, I went to see it, and it was an amazing place.”

“It was really interesting to see how nature was incorporated into the design of this whole thing,” she added, “because, from my perspective, I didn't do a lot of green screen. It was really outdoors or indoors in a real environment that was really supporting the performances and was just more fun.”

Chosen by the citizens of Moonhaven, Maite is supposed to have their best interests at heart, but when the first shuttles from Earth reach the moon, she denies their permission to land. This starts a chain of events that could threaten the future of Earth. What was going through Maite’s head? “She definitely has an opinion, a feeling - a ‘dread feel’ in Moonhaven speak - and she is not afraid to act upon it,” the actress teased, not wanting to give anything away.

For more, be sure to watch the full interview below and check out Moonhaven, available to stream on AMC+.