The story of Chloe follows Becky Green (Erin Doherty), who has become obsessed with following her childhood friend Chloe Fairbourne (Poppy Gilbert) on social media. Suddenly, Chloe turns up dead and Becky discovers that she called her the night of her death after years of silence. Wanting to find out what happened, Becky assumes the new identity of Sasha and inserts herself into the lives of Chloe’s high society friends. 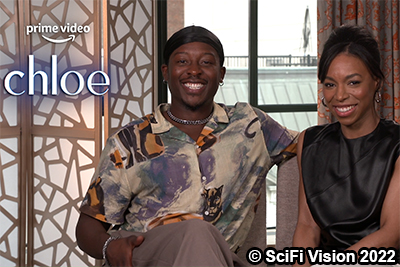 The two talked to the site about what part of their characters they found difficult to connect to. For both of them, it was about parts of the characters they had difficulty understanding. “I'm a girl's girl,” explained Bennett-Warner. “I have a lot of female friends. So, to go into that space of going, ‘Oh, this woman doesn't have successful female relationships. What does that say about her?’ was really interesting, and I tried not to judge her for that, because I'm such a girl’s girl. So, I think that was possibly the biggest hurdle to get my head around of going, ‘why would you not have female friends?’ ”

“I think Josh’s biggest hurdle,” Hall told the site, “without giving too much away, at the very end, is [the question of], ‘why wouldn't she want to run away with Josh?’ I think Josh is a very honest, complete, and a very driven guy, and it just baffles me that she she doesn't possibly want him.”

To hear more from the performers, including their predictions for the future of their characters, watch the full interview below and be sure to check out the series, now available to stream on Prime Video, as well as our exclusive with star Doherty.