Tonight, Lifetime premieres the film Jailbreak Lovers, based on a true story. The movie follows Toby, played by Catherine Bell, a woman who always followed the rules, until one day it all changes. After losing her job, Toby starts a non-profit organization at a local prison to rehabilitate abused dogs. There she meets inmate John, played by Tom Stevens, and falls in love. After hatching a plan, Toby helps John break out of prison by smuggling him out in a dog crate, and the two go on the run.

Bell and Stevens recently talked to the press about working on the film, telling SciFi Vision about what they pulled from the characters’ real-life counterparts versus what they were able to add creatively. For Bell, there was more to draw from “[I] had a lot of interviews,” said the actress, “and I watched all the ones that I could find of Toby. Obviously, I don’t look anything like her, so I gave that up quickly, but there’s an essence to her that I tried to get. You know, just she’s got that little bit of the Kansas accent and just this sweet woman who really just was totally taken by surprise by this guy, and it just completely altered the course of her life.  But, yeah, it was a lot of fun trying to become this woman who is very different than myself.” 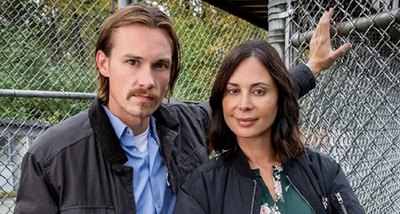 There wasn’t as much to pull from for Stevens. “I think with John Maynard, there wasn’t a lot about him,” the actor told the site. “There’s kind of the story. There’s a lot of [Toby] and of everything that she went through, but for John it was kind of more free for me to just bring the foil to her husband. I had to represent something that was something that she was missing in her life, and it was a more free experience to build the character rather than actually having interviews that I could bounce off of like Catherine obviously had.”

During the press event, SciFi Vision also asked the performers what they learned during filming, if anything. “With all the challenges that came with this,” Stevens told the site, “there’re a lot of layers to John and playing John, and whenever felt like I was kind of lost in it all, I knew all I had to do was connect with Catherine. I don’t know if I learned that about myself, but I did learn that I can trust in Catherine whenever I feel like I’m lost in a scene.”

“I had such an incredible time working with you and our connection,” added Bell. “It was just really, really special. Really, just like you said, you just look in your eyes, and it was all there.”

Be sure to check out the film tonight on Lifetime.
Twitter
BotonSocial por: SocialEmpresa
Category: Interviews