Announced earlier in the week to be already renewed for a second season, AMC’s Dark Winds is a western noir crime thriller that takes place in 1971 on a remote outpost of the Navajo Nation. The series, based on the Leaphorn & Chee book series by Tony Hillerman, follows Lieutenant Joe Leaphorn (Zahn McClarnon) as he investigates seemingly unrelated crimes including multiple murders and an armored truck robbery. He is joined by Sergeant Bernadette Manuelito (Jessica Matten) and his new deputy, Jim Chee (Kiowa Gordon).

The cast was excited to be involved. “It's pretty simple,” star McClarnon told SciFi Vision. “George R.R. Martin, Tony Hillerman, Robert Redford, Tina Elmo, Chris Eyre, just a great team that was put together that came to me in 2020, 2019 I think it was. Chris Eyre came to me and asked me if I wanted to be involved.” 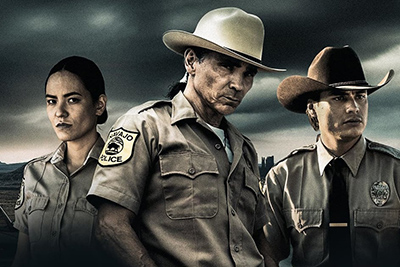 “It was very easy for me to say yes,” the actor added, saying that he was very familiar with Hillerman’s books. “I'd read a few, I think three of the books, four of the books in my early 20s, and I've read another five of them so far. There's eighteen books all together, and I keep exploring the books now.

“...[This is] show that is centered around the Navajo culture, and it uses all indigenous actors throughout the show, and that's an exciting thing,” said McClarnon. “We're in a good time. We're in good time for Native representation in television and in film, and it's an exciting time, and we hope to keep opening these doors up for future generations.”

For actress Jessica Matten, it was also about the people involved. “I had just come off another show playing a tribal cop in Canada, called Tribal, but I saw Zahn’s name attached [and] Chris Eyre,” said the actress. “Then, just the combination of Robert Redford and George R.R. Martin...that was my first curiosity. And of course, I've known Zahn, and we worked on a past project together, but it was such a small scene that we had. Just the idea of working together and doing larger scenes together was very exciting to me.”

“...I just [knew] this character,” added the actress, “and I knew that I could give her a different spin than what I previously played in terms of tribal officers.”

It was similar for Kiowa Gordon. “So, how I got a got wind of the project was Chris Eyre,” the actor told the site. “I was showing this movie Blood Quantum that I did at a festival and he was kind of moderating. He came to me after we watched it, and he was like, ‘Man, you’re a movie star. I have this project. I'm working with George R.R. Martin...You're my leading guy. Let's go. Let's talk more about this.

“...Then, the audition came up, and I put it on tape...I went out to Oklahoma, and we met up and talked and kind of just went from there.”

For more from the three performers, including what part of the roles they found difficult to connect to, be sure to watch the series, now airing on AMC and available to stream on AMC+.