Yesterday, season three of The Orville: New Horizons premiered on Hulu. The epic space adventure from Seth MacFarlane follows the crew of the S.S. Orville as they travel across the far reaches of the galaxy.

New this season to the crew is Ensign Charles Burke, played by Anne Winters, who does not get along with everyone at first, because she refuses to accept Issac (Mark Jackson), the ship’s science and engineering officer from the non-biological Kaylon-1 race. “I'm coming in new completely,” the actress told SciFi Vision, “and I love my introduction to the season. I think it really is a good first episode to show what is going to be coming this entire season. I have a lot of hatred towards the Kaylon. The journey that she kind of takes this season and learning different things as a new character on the set, not only with Isaac, but just the different characters, I think is really fun to play. I'm excited for people to see it.” 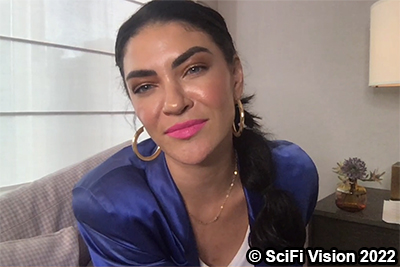 Jessica Szohr, who was also on the interview, returns as Lieutenant Talla Keyali, the ship’s Xelayan Chief of Security. She also teased a bit of what’s to come for her character in season three. “I'm very excited for this whole season, for everything, for everyone, and for us,” said Szohr. “For Talla, she kind of has a bumpy, bumpy little ride. She's got some ups and downs with her career and some relationships. I do feel like she kind of finds where she fits with the crew, which I know was very important to her. I know that Ed (MacFarlane) finds some more trust in her and gives her some more responsibility.” 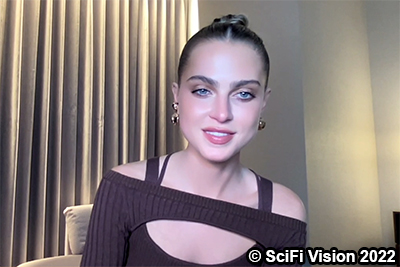 Although Szohr couldn’t tell more, she did say that she was eager for season three. “I'm very excited for this whole season, for everything, for everyone, and for us,” said the actress. “We've worked really hard for a long time, put blood, sweat and tears into this. The storylines and new characters coming on, it's all very exciting and epic and beautiful, not just the topics and storylines, but visually and just how much fun we had. We are excited for everyone to come on this journey with us.”

Both actresses also talked at length about both the fun and the challenges in dealing with blue screen, which they use a lot of the series. To hear about it, watch the full interview below, and be sure to check out The Orville: New Horizons, now available to stream on Hulu.