SciFi Vision | Interviews | Interview: Fear the Walking Dead's Jenna Elfman & Keith Carradine on What it Would Take to Leave the Tower

Interview: Fear the Walking Dead's Jenna Elfman & Keith Carradine on What it Would Take to Leave the Tower

In tonight’s episode of Fear the Walking Dead, Charlie (Alexa Nisenson) ends up very sick from radiation, ultimately because of Strand (Colman Domingo) and the way he runs the tower. When speaking with cast members recently at a roundtable, we asked what it might take to get them to leave the tower and fight Strand. “I guess it's that feeling of [for] June, where can you do the most good, which situation?” Jenna Elfman, who plays the character, told SciFi Vision. “And it's so hard, because, I mean, if you're dead, you can't help anybody, and what kind of environment is out there? With how bad it's getting with Strand and progressively worsening, you start kind of looking at the ratio of like, compromise to benefit, and at a certain point, is it worth exposing yourself and going out there? Are there pockets where you can survive? Is that less bad than the feeling of a slow death by your integrity of watching this person do these things to people and how contagious the toxicity is?...Ultimately, is it worse to stay? Is it worse to go?...What starts happening that starts shifting those viewpoints with June and her integrity and stuff, that is a big dilemma.” 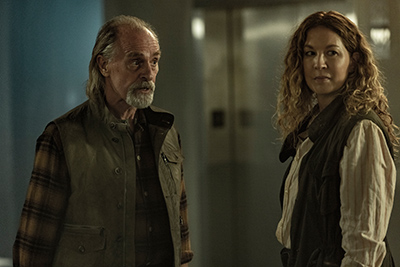 The actress added that Strand is getting worse with how he’s running things. “It's really conflicting with everything that June is, and her entire moral code is just being collided with.”

“I think from from Dory’s point of view,” said Keith Carradine, who was also at the interview, “what would it take to be able to go outside and continue the fight? I think that it's one simple thing, and that's the ability to find hope. If there's even a grain of hope, then that is the smoldering coal, if there's a coal of hope left, that still has any life in it. I think that that is what would feed certainly my character’s ability to decide to try it again.”

During the interview, things also took on a lighter tone when we asked the performers what they would like to see for their characters. “This is a show that's about survival,” said Carradine, “so if I had my druthers, what I’d really love is for John Dory to somehow achieve immortality without becoming a zombie.”

Elfman, on the other hand, joked that she’d love to sink her boots into the “deep squishy mud” where June killed Ginny (Colby Minifie).

We also talked with the actors about what they would miss if they were in the midst of a real zombie apocalypse. For Elfman, it would be a mattress, as she thinks a good night sleep is important. “There is sort of that undercurrent, I think, when we watch the show,” said Elfman. “As actors, I'm like, ‘Well, she hasn't slept; she hasn't eaten, and that's going to affect her mood.’ It's not something they're pointing out in the writing, because it's not key storylines, but if you're watching Survivor for real during long extended, like apocalyptic settings, they would be so hangry all the time and so tired and grumpy, which already just triggers everything to begin with. I feel like just a chronic undercurrent is the food and sleep factor during an apocalypse.”

“I have kind of become somewhat addicted to a warm bath in the evening,” added Carradine. “I think that not being able to have that, which is actually a precursor to a good night's sleep for me, [is] kind of the same thing. Yeah, I think I'd miss that.”

Be sure to watch Fear the Walking Dead Sundays on AMC and AMC+.
Twitter
BotonSocial por: SocialEmpresa
Category: Interviews